I bought mine with case and NOOBS card.

Thanks, I’ll check it out.

Good to see the updates, keep em coming. I’m digging out my R-pi to test the SQ vs m-c and NAS hosted b-server.

Guinnless, had quick look on b-server for Tidal to wav transcoding but didn’t see anything obvious, where do you make the configuration change? Cheers 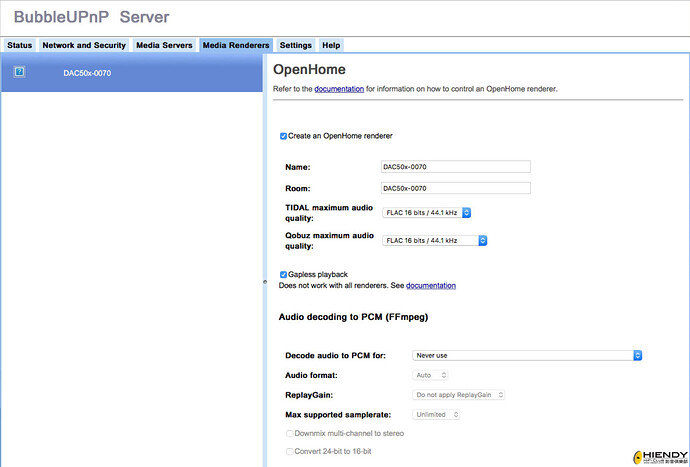 Change the Decode Audio to PCM drop-down to decode all.
Change Max sample rate to 192kHz

Looking at the raspberry website and the options I figure I’ll go with the 8gb RAM model. I don’t see a reference to a hard drive. Are the SD cards the hard drive?

One of the Rasp Pi 4 b 8GB Ram kits I’m looking at comes with a fan. I’m hesitant to add a fan since I’m connecting it to my network. Is it possible to use these without the fan or is it recommended to get the fan?

Also, reading the 272 streamer options thread makes me wonder if it might be better to get a Node 2i for the Tidal streaming or to install bubble server on.

No need for a fan.

As for Node 2i that’s a streamer rather than a proxy. And £500.
It does look like you can connect via coax or optical to the 272 but it doesn’t fully utilise the 2i.

If you want an off the shelf Bubble Server then a Sonore UPnP Bridge is a lot less money. And would allow to to use Roon as well should you wish to do so.

Ok, thanks. I can try the Pi if it doesn’t need a fan. I can add the heat sinks if that helps.

It doesn’t get hot

I run BubbleUpnp server on a 1 gb Ram RPi 3 running Raspberry Pi OS with minimal active services. 8 gb Ram is overkill, but on the other hand it’s not expensive, so why not…

That was my thought as well. Might as well get the 8GB of RAM. Just trying to find a vendor in the states that has the package I want. I figure I’ll get the 128GB SD card too.

Update.
Nearly finished installing Bubbleserver on RPi 3 but in the interim put bubble on a Wintel machine to compare with NAS and RPi once up and running.

Only issue with the Qobuz-wintel-bubble solution is tracks are intermittently interrupted for a second. Buffering somewhere. 200mbps ISP so should have sufficient bandwidth. Orbi mesh back hauling and 2960 switches.

Wondering if this is configuration in bubble as NAC272 is fine with locally fed hires.

Make sure you have setup the 272 as an Openhome renderer and you are also using the Openhome version from your client. It sounds like you are running from WiFi which isn’t involved at all when set up correctly.

I ordered a Rasp Pi 4 b 8g RAM 128g SD kit and should have it by the weekend or early next week. It looks like this is a linux based system so I will need to download the linux version of bubble server.

Putting bubble on Raspberry is a little more complicated than I bargained for. Ffmpeg on. Now for bubble. Linux skills improving but if anyone has a simple work instruction which points to urls on GitHub which still work - would grateful

Raspian should have already had ffmpeg on.