Looking like I might be able to have this work done next week whilst an electrician is here doing other work.

Any quick recommendations for the plug sockets and consumer unit that I can source from stock? Is there anything else I should source or should I leave the rest to the electrician?

I’m going with this diagram but just one run of cable going into two double sockets.

I know there is a lot I can find on this but it’s an awful lot to wade through. 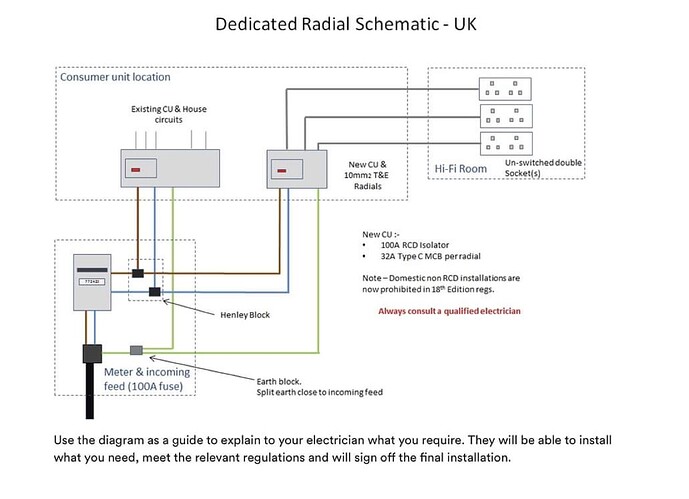 I see they’re available from Screwfix many thanks.

just one run of cable going into two double sockets

A single run into two doubles would mean the first socket would need an in and an out cable. I don’t think 10mm2 cable would fit.

If you are careful, two 10mm2 cables will fit into the back of an MK logic Plus unswitched socket…I know, because I’ve done it.

It will, but asking an electrician to do it and then force the cables into even the largest back box you can find shows that it’s clearly not within the intended use of a standard double socket to accommodate anything that thick. It wouldn’t be unreasonable for an electrician to refuse to instal it on that basis.

Ah ok will have to be two runs in that case

Which will sound much better than one shared one in my experience.

I used Schneider unswitched double sockets and their website showed that the could take two 10mm2 cables, which they did comfortably.

He can crimp the 10mm cable ends tight and use sleeves to get them nicely in the back box. You want deeper back boxes ideally.

Or just go for 2 separate radial circuits, albeit cable being very expensive.

I just ran a single spur with daisy chained MK switchless 2 gang socket faceplates and standard backboxes using 6mm T&E as that seemed the most sensible compromise.
The type/load capability of the MCB needs consideration also as does the actual demand of the equipment you’re powering.
In my case I only had to deal with a Supernait with a relatively modest peak inrush load on power up, something more substantial like a NAP 300/500 needs to have a Type D MCB to accomodate a high initial load as it charges up it’s capacitors on power on.
Discuss these load/demand considerations with your electrician accordingly.
In terms of specifying CU, MCB and cabling type, assuming mandatory regulations requirements, I’m sure there’s various exotic options you can be guided towards, your need to experiment and budget will constrain your appetite, how much spending more on something aimed at an audiophile will improve the end result being challenging to quantify.
I’d expect anything a local electrical wholesaler holds in stock from a known brand to meet your needs.
I ran my T&E in metal conduit and ran earth bonding directly from CU to supply ground.
The characteristics of your supply grounding play as important a part of your system stabilisation as any of the other aspects so be sure and discuss the grounding of your supply as a whole in that sense.
I’ve since moved house and now have a TT (old house was TN - S) grounding supply delivered from overhead and run to DNO termination underground/front drive as the drop pole is literally at the end of the front drive.
I had the earthing rod redone to ensure it had consistent contact deep enough down.

Sure, it’s even possible on a standard MK switch. It’s the strain you put on the whole assembly when screwing it onto the back box that is cause for concern.

something more substantial like a NAP 300/500 needs to have a Type D MCB to accomodate a high initial load as it charges up it’s capacitors on power on.

I’ve actually found a Type C MCB to be sufficient for my 300DR. Not saying you’re wrong, just no need to go to a D imho

My Nap300 is running quite happily fed by a type B 32A MCB, in fact it was fed by a 20A type B with very few issues (tripped twice) in 3 years until I noticed the error and called the developer back to check and replace with a 32A.

I would not use a type D in a domestic environment, in fact we have run into some unforeseen issues when using them in commercial applications.

A change of breaker type represents a change in design which should be checked by a suitably competent person before making this change.

Discuss the needs with the electrician and determine most suitable choice, I’m not a qualified electrician!

I agree, Type D is probably a step too far in a domestic setup. Not sure an electrician would allow it.

I formally stand corrected, I certainly don’t recall myself using one.
Running 10mm T&E will depend on your electricians skills and flexibility, sockets aren’t designed for it, even if with a bit of patience (and swearing on the way) you can brute force them on to the back of one.
When I last did it 6mm seemed reasonable and went in without much fuss.
As long as it’s compliant to regulations and signed off by a qualified electrician that’s obviously the baseline, the rest is down to lots of cups of tea and a pair of capable hands.
The OP has a substantial, demanding and sensitve system so overall it’s worth getting the planning phase right to avoid issues down the line including the expected needs from a mains supply, topology and grounding perspective.
Demanding termination of the sockets beyond their intended design being one factor as others have alluded to.