Yes, this was mentioned by some, me included, on the old Forum. It was suggested that this was not achievable then.

I’m curious about what you want from HQPlayer? I’m vaguely aware that you could use it via Roon, but to be honest I’ve never bothered to think about adding yet another layer of software to the signal path.

Someone on one of the FB groups asked whether albums on a NAS can be marked as favourites. I couldn’t see that this is allowed now, so perhaps that could be a new add.

(Sorry for repeating one or two points …)

Another one for the display that seems to be quite logical is “show album on actual replay of music, else off (or clock)”.
Would be my preferred one. Currently if I want to see an album on replay I have to live with the display being on for 12 hours later if I pause the music. Not so nice when I pause the music to watch TV

Would be my preferred one.

HQP is a software alternative to the £3.5k Mscaler hardware approach to upscaling. Most references to it seem to come from N.Europe and N.America - the developer is Finnish.

HQP runs as a server / endpoint in a similar way to roon, and can be integrated (in roon–>Settngs–>Setup) to be controlled via roon. I have it upscaling PCM from 44.1kHz to 352.8kHz, but it needs a powerful 8-core or 10-core processor on the server to run successfully.

For £250 approx it is good value, but is fiddly to set up as it doesn’t have as good a UI as roon - but the principles are similar.

HQP can be run without roon, and some people will run it on a separate server (there is a version upgrade to HQP to run on the Apple M1 processors which looks interesting).

Screenshot from a roon signal path on my PC right now:- 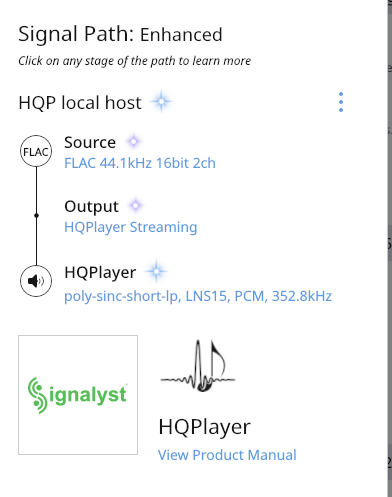 Hmmm, thanks, I could do without an extra £3.5k box on my rack. Maybe something to look at next time I feel the urge to tinker.

Quite a list already … and everybody wants it to work flawlessly

The feature request thread is starting to get a head of steam.

HH I thought you would have Drawing Room or Library Room. Sitting Room Sounds comfortable though.