I see @ChrisSU tried to get this going last year but it seems to have closed. Could this be reopened or a new thread created making it permanently available?

To start the ball rolling…

The ability to add tracks to a play queue in the Naim app via play next/play last is a great feature that I’m sure is used by many planning a few hours of relaxation. It’s especially nice to be able to come back to the play queue by pressing play on the remote after a period of interruption or even the next day. The slight flaw here is that if you decide to say catch the news at one on radio, the carefully selected tracks in the play queue vanish. There is the option to make a playlist but sometimes adding tracks or albums from others recommendations or just something you fancy listening to yourself requires more immediacy and not a permanent playlist.

1 Like
Naim App - Wish List
Naim desktop App
Muso 2 & Deezer Hifi
Naim App - How to play or shuffle the favorite track list?
NEW! Uniti Atom Headphone Edition – and streaming pre-amp!
Atom Display, Control
Use (and Useability Issues) of the Naim app (IOS and Android)
What features would you like Naim to add to their App
ChrisSU January 13, 2021, 10:31am #2

I do think it’s far too easy to (accidentally) delete a play queue, and it can be really irritating if you’ve built up a long one. The solution, I suppose, is to save it as a playlist, then you can return to it at any time.

Hi Chris, play queues and playlists serve different purposes. I particularly like being able to resume one but as you note it’s all too easy to loose a play queue.

Perhaps we could see if @Richard.Dane can make a more permanent thread to which other can add their feature requests ? You never know it may get back to the Naim emerald towers.

For those whose streamer is out of direct sight, a numerical volume display within the app (a la Roon) would be handy.
For instance if you live in a flat and have determined the volume limit that is acceptable to neighbours, this would eliminate the guesswork.

You’ve already created a thread here, so I don’t see anything wrong with keeping it, although it’s properly better off in the Streaming Audio room. I’m sure @Naim.Marketing and @Stevesky will both be interested in the feedback here and will look in on it from time to time.

I do think it’s far too easy to (accidentally) delete a play queue, and it can be really irritating if you’ve built up a long one.

This is a bugbear, due entirely to a poor UI design where Play (replace everything in current list with this track) is right next to Add To Queue. Do Naim not realise that drinking wine is a normal accompaniment to listening? Accidents will happen.

A facility to ignore / forget albums in the listing would be useful, for those CDs etc that are on the NAS and won’t be deleted but tend to be overlooked when looking through the list for what to play. Apply it to artists to, if poss. If this is something that can be already be done via Asset etc that would be great.

Hi Richard, thank you for your reply. I was thinking to make this more a general feature requests thread rather than just for streaming.
I hope that it will prove popular enough to remain permanently available.

A couple of things I’ve thought of that would be nice on the Naim app.
DSP controls which include tone controls/headphone cross feed which can turned on/off by the user. I know the argument Naim uses will say it affects sound quality and I accept that but sometimes sound quality isn’t always only based on fidelity in the conventional sense.
The ability to turn off Chrome Cast as you can with other input options - currently you can only do this with a factory reset. The reason for this is that members of my household often activate Spotify on my Nova via Chromecast rather than Spotify Connect when using their phone on their own speaker device because it comes up on the devices list and they select the wrong option and this is somewhat annoying when you are in the middle of listening to something. I would like to use Chromecast occasionally, so I don’t want to have to go through the whole factory reset procedure every time I wish to disable it.

Ap inputs: User configurable re-order the input icons at the top of the screen.

UPnP: the ability to go straight back to the top of the tree

Numerical volume control in the app/widget would be really useful.
It would also be really nice if when using Qobuz in the app, the albums could be sorted alphabetically rather than by date added. This happened with Tidal but not with Qobuz and is a bit of a pain 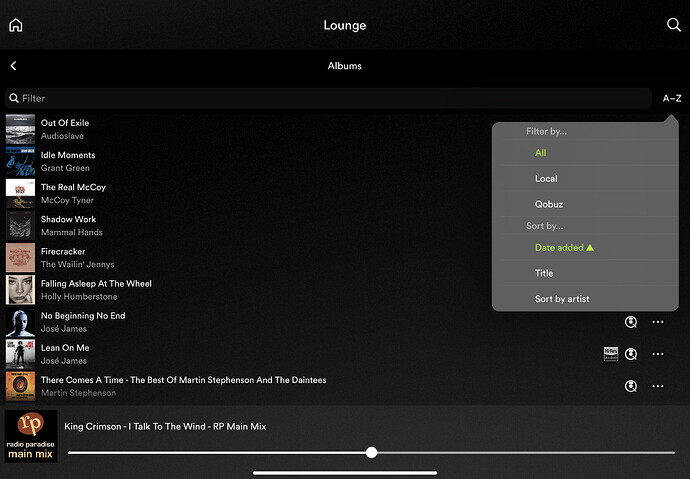 Particularly like the idea of having a numerical volume. Trying to see that little green dot on the NAC from across the living room is getting harder.

You can disable some so they don’t show but yes it would be nice to have a personal order.

I not sure if I’m using chromecast but presume when I throw something from Bandcamp to the streamer it’s chromecast the catches it?
Perhaps this is hard baked into the app as a reset is need to remove it?

Maybe it should be visible by default to make it more obvious.

I think it’s one of those sign your life away apps say yes or you don’t get to use it.

Bandcamp would need Chromecast, I believe, as I’m not sure Bluetooth or airplay are options. I haven’t really looked into that as I already have many choices of musical access. However, the ability to turn it on and off like the other inputs would be nice though. It might be something to do with the licensing with Google though because you have to agree to terms and conditions when you enable it in the first instance.

You read my mind.