Naim Audio is delighted to introduce yet more listening options for its award-winning family of music-streaming players and systems, with a free software update enabling TIDAL Connect. 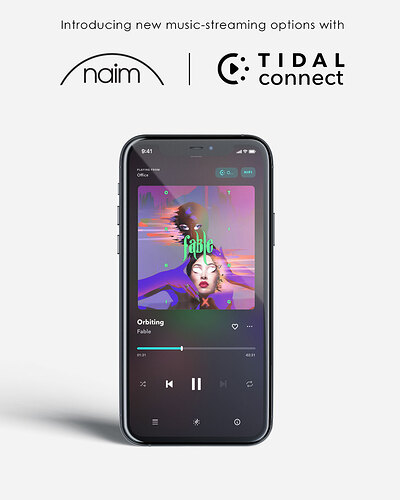 TIDAL Connect allows you to explore all the rich features of the TIDAL App, and stream your choices in superb quality direct to your Naim player or system. Users can continue to enjoy core TIDAL streaming functionality via the Naim App if they prefer.

The Firmware 3.7 update for Uniti Atom, Uniti Atom Headphone Edition, Uniti Star and Uniti Nova music-streaming systems, plus ND5 XS 2, NDX 2 and ND 555 dedicated streaming players, will be released on 23rd September, with a matching update to follow for the Mu-so 2nd Generation family of wireless speakers. The update is quick and easy to install via the Naim App.

TIDAL Connect is available to all subscribers to the streaming service; a 90-day free trial is available for new users when they buy any of the current Naim streaming family.

When is Firmware 3.7 being released?
We plan to start roll-out from 23rd September
The free update will automatically appear in the Naim App for easy install.

What about older-generation Naim streaming products?
It is not technically possible to update legacy products with TIDAL Connect functionality. (TIDAL Connect requires a Linux operating system, which the legacy products are unable to run.) However, users can still enjoy TIDAL as previously, via the Naim App.

What is TIDAL Connect?
Just like Spotify Connect before it, TIDAL Connect allows you to enjoy all the rich features of the TIDAL App, and stream your choices direct from your devices to your Naim player or system. Users can still enjoy core TIDAL streaming functionality via the Naim App if they prefer. Available to all existing or new TIDAL subscribers.

Are there any other significant updates in Firmware 3.7?
No, just some minor improvements bug fixes detailed in the Release Notes below.

Can I use TIDAL Connect in multiroom mode?
Yes – even to Naim products that do not support TIDAL Connect. Simply open your TIDAL App and start playing via TIDAL Connect to a compatible Naim product (Uniti Atom, Uniti Atom Headphone Edition, Uniti Star, Uniti Nova, ND5 XS 2, NDX 2, ND 555). Then add other Naim products on your network via the usual Naim multi-room methods: via the multiroom icon in the Naim App; via the front panel/remote on the master device, or by pressing the multiroom button on the Mu-so 2nd Generation/Mu-so Qb 2nd Generation that you want to join the session.