Extraordinary week. 2 away games. Game in hand gone but top of the league by 3 points and with a marginally better goal difference. Threw away a 2 goal lead at a rejuvenated Maidstone having gained it with an offside opener and a penalty that plainly wasn’t. Won it in the last minute with a tap in gain at the run of play from a defender who is comfortably into double figures.

Largely outplayed by an excellent Gateshead tonight in a 1st half in which we created zero chances and would have been a goal down bar 2 decent saves. Looks like we ran riot in the 2nd half but we scored 3 from errors.

Can now relax and have some fun going out of the FA Cup on Sunday.

Times is reporting that Moshiri adamant that club is not for sale!

Who would buy a club where academics predict the new stadium will be underwater by 2100?

They’ve probably looked at the video I posted on here yesterday.

Q: Which stadium is closest to the Mersey?

I’m one of the annoying tourists who is watching Wrexham closely after the documentary. Good luck for the rest of the season.

Fingers crossed that this is finally ‘the season’ Mike.

Imagine the upset at St James’ Park if Saints were to nick it on Tuesday night! (I’m a football romantic so I can!)

I for one would be cheering. 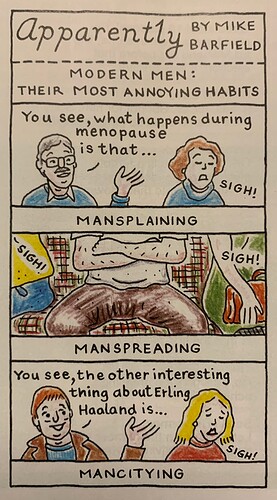 From this week’s Private Eye

They would be the ones.

I’m one of the annoying tourists who is watching Wrexham closely after the documentary. Good luck for the rest of the season.

A very strange series indeed. I know this side of the pond is not the audience but it was very odd. Tonally all over the place. There were a couple of great episodes but then there was stuff like the episode on Wales, which I had to watch through my fingers. The focus on Wayne and the Turf is unrepresentative but the attempt to make Shaun Harvey look like a decent human being was regrettable.

Fingers crossed that this is finally ‘the season’ Mike.

It actually might not be. There’s a sense that we’ve made a couple of purchases not driven by the manager who have been wedged into the team recently. We’ve lost pace and creativity.

On the other hand we are, sadly, now Forest Green. Throw a couple of million at it each season and eventually it will happen. Nauseating really but I’ll still cry real tears if it happens.

Good win last night. After the dropped points the two previous games and our third game away it could of been a difficult night. But the performance was good. Very good. Rashfords goal! Nearly back to Wembley! More to do

Arteta is ringing the changes for FA Cup trip to the Etihad this evening Matt Turner is in for Ramsdale in goal, Tomiyasu is in for Ben White at right back, Rob Holding in for William Saliba, Kieran Tierney is in at left back replacing Zinchenko, Fabio Viera in for Martin Odegaard and new signing Leandro Trossard is in for Martinelli.

Meanwhile Pep has gone full strength and is going all out I have to say I’m actually happy with the changes Arteta has made as taking into account the three competitions we are in the FA Cup is without a doubt the least important as we don’t have the squad to fight properly on three fronts.

My prediction is 3-1 win for Man City.

Well done to City. I have to say though that Arsenal’s B team could easily have won and kept Haaland quiet no goals, no shots on goal.

See you at the Emirates Pep on February 15th when our A team will play.

A strange Instagram post from Moses Caicedo of Brighton where he thanks Brighton and Tony Bloom for all they’ve done but that he has take up this new challenge.

He doesn’t say where he is moving to both Arsenal and Chelsea are said to have put in bids for him but nether club or Brighton for that matter have made an official comment.

In the post Moses also states that he is the oldest of 10 siblings from a very poor family and wants to go on to become the most decorated player in Ecuador’s history.

Seeing as we cannot or won’t compete with Chelsea financially it looks as if Moses Caicedo is off to Stamford Bridge.

On a much happier note for Arsenal fans 21 year old winger Gabriel Martinelli has just signed a new contract until 2027 with the option of another 12 months.

As Daniel Geey keeps pointing out, the extension of an EPL football contract nowadays is largely not a deal to keep a footballer at a club. It’s simply a deal to define the outer limits of negotiation if/when they leave.

Gabriel Martinelli has just signed a new contract until 2027…

Which simply means nobody else wants him.

My Saints just squeezed past Blackpool at St Mary’s in the FA Cup fourth round today. We made heavy weather of it but a win is a win, and we have not seen too many of those recently.