Isolation - this time it's speakers (and Gaias)

We seem not to have had a thread on the widely-used Isoacoustics Gaias or any rivals for a year or so, so…

Over the last couple of years, I reckoned that 32 posts here and elsewhere (inc. PFM) reported a decent improvement in bass control and hence overall SQ. 7 didn’t like them or couldn’t get them to work well, of whom 5 had thick carpets.

The comments persuaded me to try Isoacoustics Gaia II’s between my B&W 804 D3s and my bouncy wooden floor on a 14-day trial. The different tonal balance meant experiments repositioning the speakers, and levelling took a while, but fitting was easy.

The short way summary of what followed is - “You (collectively) were right!”

In my room and system, and in particular on my bouncy wooden floor, the B&W’s rubbery feet sound perhaps a touch better than the spikes (I checked that first as a base case), but it is so close that I could pick differently on another album and another day.

The Gaias are not so subtle or missable in their effect. They do very little to low-volume female voice IMHO, at least at first, but the stereo image is cleaner. As soon as the volume goes up and a punchy bass comes in, there is a clear improvement - tighter bass means more vigorous rhythm, not less.

The fact that they raise the tweeters to exactly ear level may be contributing to the sound difference, but I don’t mind too much what has improved technically - only SQ. The usual tests (Hejira, Cowboy Junkies, DSOTM, Graceland, Rite of Spring, Bruch Violin Concerto) show much better bass control. I can play a touch quieter and make out lyrics, but the most obvious change so far was Nirvana’s Come as You Are at the sort of volume that would be approved of in Seattle - the improvement in bass grip is really noticeable, making everything else a bit easier to hear clearly and making any rhythmic subtleties clearer.

For context, I changed the olive 250 that has served for c.30 years this week (!) with a 300DR. That is certainly a bigger upgrade of course, and I am struggling to think of one of the cliched hi-fi areas that it doesn’t make a bit better, with no balancing downside except cost.

The Gaias are not like that - they make bass cleaner at any volume, so it does not cover up anything else that one might have been missing and rhythms are more obvious. They have one job to do, and seem to do it well.

I am doubtful if I could have achieved the same results with a DIY Sorbothane approach, but I really don’t mind. Mind you, they make my ‘How much of your system spending was on speakers’ score look worse than it did…

How many here have tried Isoacoustics Gaias and kept them - or tried them and hated them?

And has anyone compared more than 1 or 2 of the alternative products?

Finally, my suspicion is that how well they work depends largely on the floor, not the speakers. Is that borne out by what others hear?

I have used Gaia IIs for several years, first on my old B&W Matrix 802 S2s and lately on Kanta 2s in two different apartments. Both apartments have concrete floors.

My findings are much the same as yours: very positive. Bass is much better: cleaner and punchier, making everything more rhythmically involving. Soundstaging is also improved, especially front to back.

The difference in my system in my room is not subtle, and I have said on the forum before that I think the improvement to be had with the Gaias is well worth the relatively modest outlay.

Thanks. The front-to-back comment is interesting because I hadn’t thought about it. I hear what you mean.

VFM is relative of course. If I had £2K to buy a hifi, I would hope not to need 8 Gaias. For those whose hi-fis have prospered as ears (eyes, knees) have suffered, they look great VFM - cheaper than one Powerline or an upgrade to a better MC.

Totally agreed: whether it is good value will depend on the cost of the other equipment. In my own case for sure it represented good value for money.

Several domestic (i.e. non-studio) speaker makers now seem to endorse using Gaias as I understand it. One post suggested that this included the excellent Bob Surgeoner of Neat, though perhaps not for those downward-firing drivers.

Given that, I am slightly surprised that more dealers don’t try treating them as an automatic extra sale to anyone who does’t already have them and is spending a few thousand on speakers.

Bass firmed up, became more tuneful, and it was now much easier to follow basslines.

The big surprise came with the soundstage.

I always had a great side-to-side soundstage, but suddenly I got a front-to-back one as well, where I can place instruments within the mix.

Yes, I had to get in touch with Bob to confirm the thread sizes for the Gaias, and he told me he had been trying them out at the factory, and was investigating a deal with IsoAcoustics to supply them with his speakers.

They were supplied to me by AudioT on a “no like, no keep” basis, which made it something of a no brainer.

It is noticeable that those making the less courteous comments on PFM are often keen to ‘explain’ that they can’t work (from first principles), rather than saying that they don’t work (from having heard them). Those who do try them for free seem to keep them.

Sadly, in the potentially OCD world of hi-fi, the “I’m an expert, and I know whereof I speak” fraternity, can rarely resist rushing into print to tell us mere mortals that we’re getting it wrong … … … again.

So thank goodness most of us prefer to trust our own ears when it comes to parting with our cash.

Gaia 3s on my Solidsteel stands for my Tab 10S, had them on two different floorstanders before big benefit for me on suspended floor.

I am thinking of getting another set for my stands in office just to get the extra height it’s a solid floor so not sure if I would get any extra benefit though.

I noticed an improvement but I did find them fiddly and required regular tightening but yes I view them as worth while.

I have now sold mine and replaced with the Townshend Podiums and they are fantastic - pricey but I got mine second hand.

I did have a wonky floor with some floorboards and some concrete…… so the podiums really did make a game changing difference.

I would very much agree with your posted findings Gary. My Podiums were a total game changer for literally all aspects of the replay, faster/tighter and better resolved bass, better separation and sound stage etc.

Anyone tried them between speaker and stand rather than stand and floor?

Curious on the views on carpet having just relocated system to lounge with a very thick carpet and underlay from the previous hardfloor location. Still using the Gaias with their own carpet spikes.
Of course I can refit my Sonus Faber spikes and decide for myself, but as ever previous experiences of some here is always valued.

would very much agree with your posted findings Gary. My Podiums were a total game changer for literally all aspects of the replay, faster/tighter and better resolved bass, better separation and sound stage etc.

My house is 100 years old so lots of room challenges!

I have literally never heard them on carpet.

From the comments I could find, most people who said they had carpet liked Gaias (6 from 9). Of the 7 who did not like them, 3 had carpet and 2 blamed the thick carpet and spike issues as the likely problem. Only 4 of the 20-something people with a wood floor did not like the Gaias. Some people gave no clue about the floor.

Can anyone with really thick carpet who has tried with and without Gaias help?

When I recently moved my ProAc D30RS speakers from a room with wooden floors upstairs. The speakers were spiked and sat in Metal chips. The room downstairs had cement floors with a thin wall to wall carpet. The speakers lost some of their magic and were difficult to move/adjust.

I looked at Gaias II as a possible solution for my ProD30RS speakers. The cost locally was $ 659.98 for two sets of four. (Price was retail with sales tax.) I did read the reviews and saw them on a set on a pair of floor standing speakers at the dealer showroom.

What I did end up buying was 8 of Herbie’s Giant Titanium Cone/Spike Decoupling Gliders The cost was $351.12 which included shipping.

A couple of reasons for choosing the Herbie products was ease of installation. I would keep the existing spikes on my speakers and replace the small metal cups with the gliders. I did not want to go through the process of installing the Gaias and then removing them if they did not meet expectations. You could say there was a age (70) factor in my decision process to try the Herbie’s product first. There was also the price consideration.

The speakers are now easy to move and their is an overall improvement in the sound, improved clarity, soundstage and bass. The best part was my wife has hearing loss and uses hearing aides and she was smiling and stating how much better the system was sounding.

As some folks have stated on the forum, I was gobsmacked!.

Value for money spent was outstanding and highly recommend.

Just thought I would mention an alternative to the Gaias. 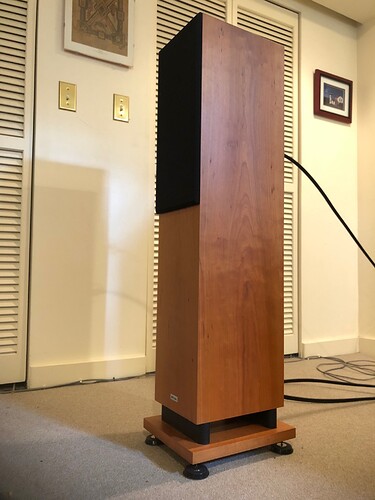 Interesting. Thank you. Things are sounding so very nice with them I’m not minded to fiddle. Once I’ve got used to my 300DR perhaps I’ll compare.