Anyone tried running the Naim app on the new Macbooks using M1 AMD chipset? Seems like it should be possible meaning you might be able to control your Naim system through your Macbook. 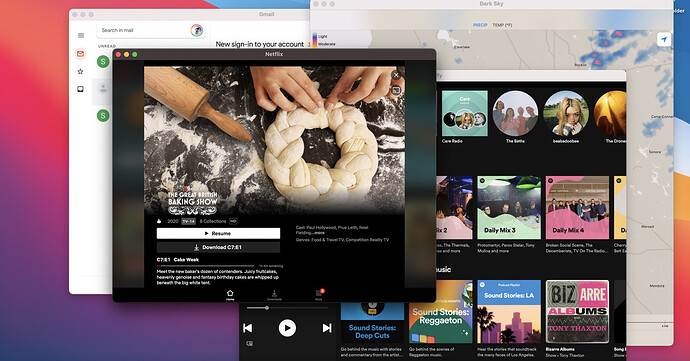 I’d consider this first wave of M1 based products more as “prototypes”, the ability to run iOS apps is a nice feature but don’t forget the Naim app is designed around touch, and you can’t touch your shiny new M1 Mac’s screen, you have a navigation overlay, so it’ll almost certainly work, but won’t be a very comfortable experience I imagine.
I’m personally holding out till they bring out a next gen Mac Pro tower and a new 16’ MacBook Pro where you’ll see the real potential from the move to in house silicon.
The good news here is after the initial investment in the R&D and productisation Apple will benefit from a significant saving in the silicon cost and fabrication which will translate to a broader range of products at competitive price points.
The fanless MacBook Air has impressive performance against the alternatives and it all shows a lot of promise for what’s to come.
I’m still too scared to update my 7 year old MacBook Pro, my wait continues!

I’m also using a 2013 Macbook Pro. What a great piece of hardware. Never failed on me. But now for the first time since then I might jump to a Macbook Air… Waiting for some more reports.

Late 2013 15 Inch MBP in my case, agree it’s been a great machine all these years, it struggles a bit with certain things and the 1TB internal SSD is pretty full but it still works well thankfully.
The main issue today on the new M1 based hardware is native vs emulation (using Rosetta 2) and I have a lot of work related apps that won’t play ball in that new world, not yet anyway.
The emulation of x86 code works pretty well and is fairly quick once it’s setup and loaded but it hammers the processor and runs the battery down measurably quicker.
Once my work requirements are ported and running Native and the yet to be released true Pro spec hardware is released I’ll give it a serious look.
If you need only mainstream apps and use a browser (ideally Safari for now) primarily then the current first gen M1 products could be a good fit.

That is a rather scary position

One of my team mates (project tech lead actually) just upgraded, and another bought a new M1 Mac (which will mess him up some because Docker doesn’t work), so I plan to upgrade soon to Big Sur. I’m just waiting for a Big Sur compatible upgrade to Music Collector, which I use all the time to catalog my record collection.

Early reports are very positive from what I’ve seen. I think that’s remarkable.

I’m still on the latest Catalina. I usually wait for the second release before I upgrade to a new OS. Are there lots of issues with it?

Apple keeps trying to make OS/X look like IOS. Every time I upgrade my iMAC I have to sit closer to the display.

My wife used to hate it when I’d update her iMac.

You probably need to give it some time to index and backup everything before the processor/io utilization settles down to normal. That can take up to a day or so depending on various factors.

The graphics design is worse IMO. The grey menus are now almost white and it makes it tough for the eye and more diffuse so I had to go dark mode. The rounded corners in windows are awful too. I wouldn’t update if you are not a curious person like me. It went downhill IMO but one gets used as always I’m sure.

Personally I’d at the very least check that any apps you use frequently are either already supported on Big Sur or have a plan to be soon, nothing worse than upgrading only to find you get a pop up telling you it’s not a supported application.
Ultimately the move to the new ARM based Apple Silicon is very much in it’s infancy and there’s a 3-5 year window ahead as they gradually transition away from Intel x86 based products and transition the Mac OS and application support away from emulation to being natively supported on the new silicon.
I remember going through all this the last time moving from Power PC to Intel and the outrage at the time as they moved away from ADB to USB and let’s not forget Firewire and the headaches that caused.
If you have a shiny new M1 based machine they you’re probably off to a good start, anything Intel based and even the recent hardware, I’d be inclined to hold off till it all beds in and has had at least a minor revision or 2 to iron out all the issues.
I personally can’t find any fault with the most recent Catalina release on my machines, they boot up and all the apps I need work anyway!

I have the new MackBook Air with M1 and can install the Naim App (from the App Store) and it works fine! Now I can use my MacBook to control my Star & Qb

Ahh that’s it. Need to get one

Big Sur broke the thunderbolt connection to my Drobo 5D. I’ve been looking to move on from it for awhile and this was good impetus (though I’ve heard the connection is back with the next beta). Waiting to see if there’s any Black Friday deals on Synology.

It’s by no means the same transition but it is new hardware and only the start of a very long process to migrate away entirely from x86 based hardware, system software and applications.
Apart from a small number of 3rd party applications and those bundled by Apple, everything else has to be emulated using Rosetta 2 until those apps are ported to be universal binaries or native apps.