Since a few weeks I own a Uniti Star and tried to find out if placing a 512 GB sd-card in the back slot of the Naim will work. Or is there a maximum capacity?

The general info of Naim mentioned also the same amount. In earlier posts however I could not figure out if there is a maximum of GB the slot accepts to handle.

It appears in the documentation that it will take max 32GB SD-Card:

The Uniti Star by Naim Audio is a unique music streaming system with an array of features to ensure you get the most out of your music. Find out more here.

If you want a large store use an SSD drive attached to the USB slot.

Thanks you for the response.

The fact is that using a 64 GB sd-card, the Naim does not stop ripping at 32 GB.
Because in some posts people indicate using a 512 GB card, but did not specify how this works, I wanted to check via this forum if someone could clear this for me.

I never use an SD card with mine so cannot comment on that specifically.

But what I do know is the reason there are limits on the size you can use is generally cause the software driving the system cannot address more memory than that. That is true on computers and will be true here as well.

So my gut feel is that it may keep on working past 32GB but you will have no idea where it breaks down exactly and what the effect of that could be on the data store.

So up to 32GB you will be good but after that you are out at sea.

Mostly with limits like these in relation to Naim products is that they have tested the number they say and guarantee it works. A larger number might work, or it might not. Naim doesn’t advance any opinion on that. 32 GB seems to be one such number.

This baffles my mind haha.

I mean that is a significant difference. Perhaps it was a limit on a previous firmware and has since been changed and the docs not updated.

To be honest 32 GB max does sound a little low, all things considered.

32gb is the alleged limit that windows can happily format as fat32, that’s the only reason why 32 might be considered as the max size.

Obviously 32gb isn’t the limit for Fat32, you can go much larger than that! (Using the correct software).

Super Paulbysea, now I remember your post from august ‘19. In that specific post you said you were even using a 512 GB. Did you rip cd’s with the Uniti Star, or with software?
Robert_h, what kind of software do you use?

You can use usb hard drives with a unitiqute. Simply reformat as fat32. Windows won’t do it, limited to 32gig, but other software can. (and dont try to do it through powershell, it will work but it will take forever). I use AOMEI Partition Assistant, you can get a free version (“standard” they call it), from their website, it works really well, also let’s you do hdd->ssd migrations etc. Here is my 320gb drive. [image] [image]

Thanks so much. I wanted to use a 1 TB hard disk via USB, but placing such a device behind or in front of the Uniti Star visualy it was a ‘no go’ for my wife😎. I use Mac so AOMEI is not an option.

I don’t know if there is software to format a larger than 32 GB card on the Mac to FAT32 (googling didn’t turn up any for me), but according to the online docs you are not limited to FAT32 but can use Mac’s native HFS as well,

I’m not sure if this actually is HFS or the newer HFS+ though. On another page about a store for ripping they write HFS+ 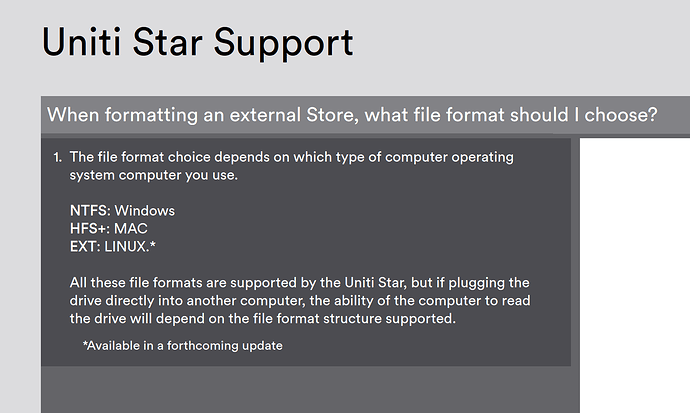 I have a black Ssd and it stands on its edge at the side of my Star unobtrusive. The lead comes out the back.

I use the Star to rip the CDs as WAV files. I was going to transfer them to a WD NAS but it won’t play nicely with the Star due to Naims quirky way of storing metadata.
I have also used a connected 1 Terrabyte HDD for a while but decided, for now, SD cards work best for me.

Best to rip to FLAC so that you don’t have this anomaly when you use the rips on a non-Naim device. Unlike its predecessors the Core does not allow you to transcode existing rips from WAV to FLAC so you would need to rip again.

I might well have done that if I realised when I ripped my CDs. I had ripped to WAVs because my dealer advised it and on the shop demo 500 system I could detect a slight difference between WAV and FLAC.
When the 272 replacement comes out and I get a Core I will do some FLAC/WAV rips, listen to both and decided which way to go with the rest of them.

This is one of a number of issues that would stop me from buying a Core. I do think the difference between FLAC and WAV is much less noticeable on the 2nd gen streamers so possibly something you wouldn’t need to worry about. Another thing it can’t do is transcode FLAC to WAV on playback, which is something that makes the choice of storage format a non-issue if you use a Unitiserve, HDX, Asset, Minimserver and others.

Thanks again for all your tips. To avoid any problems in the future I will go for a WD Elements 1 TB portable harddisk. They are small, and indeed easy to hide for my wife behind the Uniti Star.

i just have to figure out if FLac or Wav is the best option to rip. Ripping on a Mac is quicker and easier than on the Naim, however on the Mac getting the immage of the cd sometimes is not working fine.