My understanding is that 2nd HiCap or Supercap enable different parts of the NAC 282 to be powered independently. Two Hi Caps may introduce earth ground loop issues I gather as separate devices.

Appreciate many find no improvement with 2 HiCaps or worse, but can someone kindly explain which bits of circuitry each SNAIC connection powers, or does one power left channel, the other the right?

Just thinking that if you have 2 Hi Caps, if one might be better than the other (I know it’s suggested not to mix) in terms of time since servicing, or one is DR the other not, is there a preference to which is connected to the power/signal socket vs upgrade 2? 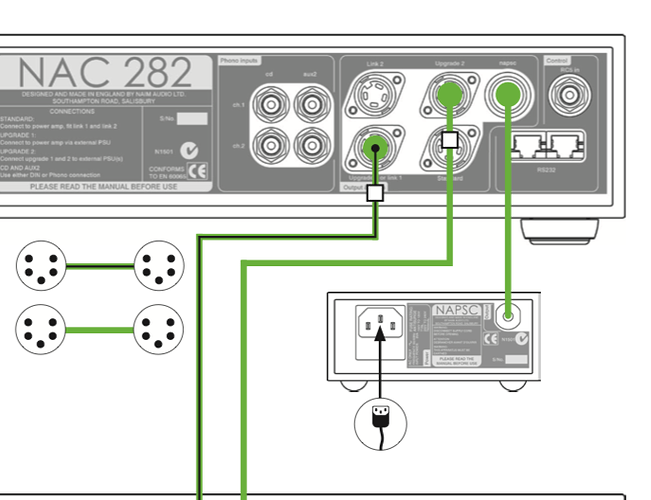 The Hicaps must be matched both in design and service is what Darran @ Class A told me.

A Supercap with one SNAIC powering my 82 is better than a single Hicap. Darran serviced my Supercap [1] and the uplift was enough to have to reposition speakers…

Darran told me that two Hicaps are fine and there are no earth/ground issues.

[1] It started life as a 52PS and was upgraded in 2004 (based on Cap date codes). Even though production ended in 2002 Darran advised that converted Supercaps were serviced if the existing caps were over 18 months old so you got essentially a brand new Supercap.

Appreciate they should ideally be matched if using a pair, but any adverse effects will presumably be sonic rather than electrical.

Just trying to ascertain if two Hi-Caps powering a 282 do 50/50 of the work with different circuits (e.g. L/R) where you could see matching was important, but if they were different circuits entirely they might not share the work 50/50, and one might work better as the 1st power/signal than as the 2nd power alone if you see what I mean.

All just a bit of silly tweaking perhaps, and as I have several Hi-Caps to hand I have the urge to fiddle when it’s probably all a waste of time.

Apologies. I’ve deleted my previous post as it looks like I was wrong. After a bit of searching it appears that they do split left and right - this could be why they need to be perfectly matched.

Would make sense wouldn’t it which is why I was wondering.

A bit like old 2-4 NAXOs/SNAXOs needing matched power amps as they powered a single speakers whereas the latest seem to allow potentially different amps for different drivers.

There’s a wealth of posts on the old forum archive on this issue. A summary would be that some feel 2 (matching) Hicaps offer a significant improvement over 1. Others feel that a Supercap gives a more worthwhile improvement.
My experience suggests that the source is an important discriminating factor. The better the source the greater the advantage of the SC over 2 HCs.

According to WitchHat Audio (started by ex Naim engineer), it was posted on PFM that this is not the case & something Naim haven’t bothered to clear up on the forums. The upgrades do not power L & R independently, they power different power stages IIRC. Numerous people have powered their 282 with non matched power supplies, some even from different generations (ie DR & non DR to even Olive).

I power my 282 with non “matched” supplies & have no issues or channel imbalances, etc that some in the past would claim to be the case if you did so.

Daren_p,
When we say they are matched, it means that they are electrically close in characteristics. It is possible that yours may be “matching” or by shear coincidence, two random units work well together.

That said, I believe the variances are typically small from unit to unit. At the end of the day, it is the listening that gives the final verdict.

The 82 is split left and right for the Gain and Time Alignment stages. Mark at Witch Hat apologised for his mistake.

I have a 282 powered by 2 matched HiCaps. I was under the impression they were split L and R. What I can say is that the 2 HiCaps in my system sound better than one, hence they are both used.

In the old forums there was a lot of debate around that, but for me a clear winner with 2 HiCaps.

I have a 282 powered by 2 matched HiCaps. I was under the impression they were split L and R. What I can say is that the 2 HiCaps in my system sound better than one, hence they are both used.

In the old forums there was a lot of debate around that, but for me a clear winner with 2 HiCaps.

I guess the only way to know for certain is to do the comparisons,

Daren_p,
When we say they are matched, it means that they are electrically close in characteristics. It is possible that yours may be “matching” or by shear coincidence, two random units work well together.

That said, I believe the variances are typically small from unit to unit. At the end of the day, it is the listening that gives the final verdict.

Yes I understand when “matched” is said, we are talking electronically, after all what else would you be matching? If you’re running HiCaps from two different generations, which are both electronically & sonically different, how could they be “matched”? Just speaking about the 282, I know of people that have run one Hicap DR & one standard black box Hicap, other’s that have black box Hicap with Olive Hicap, etc, etc. I know for a fact mine aren’t matched “electrically”. If using two units that are sonically different & they power L&R independently, one would think they would sonically cause some issues, I would assume for sure in the soundstage & imaging, which doesn’t appear to have been the case with anyone who has done this on the 282.

The 82 is split left and right for the Gain and Time Alignment stages. Mark at Witch Hat apologised for his mistake.

When was this info corrected, I believe his previous posts on the subject were ~6 months back. Not sure if the same applies for both the 282 & 82 (speaking specifically about the 282)?

This was in January this year. Another post also provided pics and an explanation of the wiring layout clearly showing split channels.
I can only assume the 282 layout is the same (with the exception of the Buffer stage) as Mark said so as below.

“I owe everyone an apology as I said earlier in this thread that the 82 wasn’t wired L and R between the two power supplies, well on looking in my notes and not relying on my memory I can clear things up a little. The truth is that it is and it isn’t. Let me explain: With one or two hicaps the gain stage is split L+R between the power supplies with one rail from each hicap powering the gain stage and other rail doing everything else - which is most of the rest of the circuitry for that channel. Except the tape buffers are swapped on the 82, but not the 282. This is due to the board layout and mute circuit location and means that the mute will not lift unless both supplies or a link plug are fitted. That’ll teach me not to write about them without my notes in front of me.”

I have a 282 with one HiCap DR and often thought about adding a second one.

Yes. Signal for L&R flow from just one SNAIC but power to the 282’s L&R rails is fed by the two SNAICs separately.

As a good dealer once explained to me:

Arbitrary I know, but a pretty good summary in my view.

I’m probably standing pat with a single HCDR for now anyway. I have done some massive upgrades in the last year to every part of the system, plus an ultrasonic RCM just this week. I might be put to death over yet another acquisition.

A 282 powered by one HC is the best value for money. The cost performance of it is great.

I only added a SCdr because I wanted to buy myself a present and although it was a good bit better, I could have stayed on the single HCdr and been happy forever.

Pretty much spot on. I’ve owned all but the first - but I made the choice to go with a HC over powering via the 200 when I purchased back in 2008. I purchased my second HC when there were some ex demo ‘deals’ at the time the DR versions were beginning to appear. I thought the second HC - which clearly was in no way ‘matched’ to my first - was a really worthwhile upgrade. I don’t get the matching thing - it’s just a power supply, surely they all leave the factory within their operating tolerances and are by definition matched.