Interestingly, VLC have just released an update that says “Fixed discovery of UPnP/DLNA servers on iOS16” so presumably whatever Apple have locked down, VLC have coded around it

I thought my iPhone SE was new enough but just 15.7 as is my 6th gen iPad. I wonder how many years use I’ll get out of them?

And for your iPhone SE, I think you will find if you go to the update screen, there is a link at the bottom to IOS16, although whether that is the case for all iPhone SEs I don’t know.

Anyway IOS16 seems very buggy and I suggest you leave it on 15.7 for the time being.

I have had the same issue with IOS 16 on my iPhone with Synology NAS no longer connecting but have managed to resolve it by changing a setting in the Media Server App installed on the NAS.
The SSDP Advertisement Interval was default set at 920 seconds. By reducing this value you should be able to link to the server again through the Naim App. I actually reduced it to 10 and it hasn’t affected anything else as far as I can tell. Hope this helps.

Hi All, Same issue with my IOS16 on my iPhone and works fine on iPad Mini.
I have checked on many upnp servers, MinimServer, Foobar2000 upnp, jRiver upnp, same issue with all of them. Naim App can’t find the upnp server.
Please note: Any of upnp servers above become visible when restarted and Naim app is open on UPNP tab.

As you may have seen >> here << we have a new app coming out in early October.

Because it is so close to release time, this app cannot be altered. However, there will be a patch release containing a fix for UPnP discovery soon afterwards.

We apologise for the inconvenience caused, and as others have stated, the cause is a change in iOS 16 which has affected other apps too.

In the meantime, please note the following workarounds which may of help to some:

This worked for me.
Thank you!!! I wasn’t been able to enjoy music for the past weeks but now I can again.

It’s the second time in this thread that he has told us the workaround.

Will it be possible to keep both the existing app and the new app on a device at the same time?

However, there will be a patch release containing a fix for UPnP discovery soon afterwards.

Soon after release of the Naim/Focal combined app? Does this mean it will be possible to retain the existing (Naim) app with iOS 16?

Ok. Thanks for the heads up.

Only showing when i rescan files at Minimserver same time when Naim app is open and server page is open.

If you read the announcement on the sticky thread (and Will’s post above) you’ll see the last paragraph - here:

*Please note that update 6.0 for iOS does not include a bug fix for the iPhone UPnP discovery issue related to iOS 16. Our software team are aware of the issue and are working on a patch for this issue.

Updated my iPone software over the weekend to IOS16 and have the same issue.
Naim app controlling my ND5 XS2 can’t find my Synology NAS server. Or, to be more accurate, takes about 15/20 minutes. And then drops it in an instant. So basically inoperable.
Fortunately I have an old iPhone running on an older version of IOS but obviously this is only a short term solution.
Look forward to the patch that can resolve the matter.

On your Synology NAS open the media server app. In the general setting menu go to the SSDP tab. The default value should be 920 ( or something like that). Set this value to 5 and click apply. Then your NAS should be immediately available on the Naim app 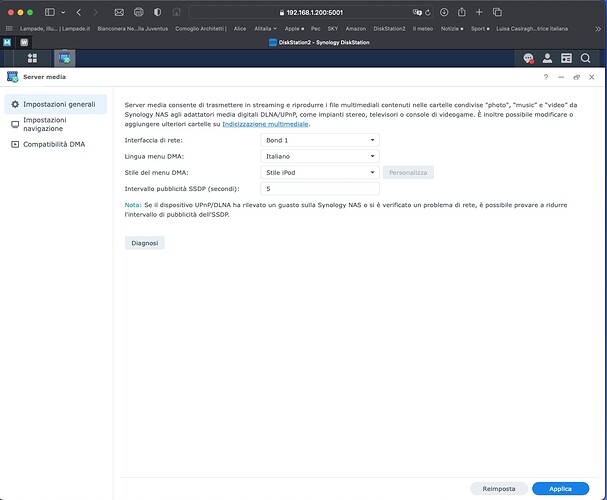 Thanks Peppo62 That works

You’re welcome.
Glad it helped you.

That looks promising, thank you. Does that work with Minimserver as well?