I understand what you are saying @frenchrooster. This is why I plan to get an NDX2 with a 202/200.

I used to go to hifi shows in the uk with my dad when I was in my late teens. I have heard all different types of systems. I just can’t live with average speakers. Period. Many average speakers are riddled with issues. Poorly designed crossovers, rubbish components, poor damping and cabinet bracing. Cone break ups are there with some drivers and can’t be resolved. I don’t want to live with that if I don’t have to. Average speakers are built to a price point and that price point will limit their performance not to mention the laws of physics by which all speakers are bound.

I borrowed a friends nova recently and tested it on my speakers. The $4000 AUD price difference from my Atom resulted in such a small difference in sound that it was laughable.

$4000 AUD is the price difference between my old 6+1 floorstander, and my current speaker. The difference in sound between these two speakers is huge.

With this type of kit the law of diminishing returns is more relevant the higher you go. People get very carried away (most likely because they can afford to). The differences are quite small and prices so large.

There are 30k systems on here with 2k speakers…. That’s insane. The system is only performing at 20% of what is possible.

I think you got your question answered by someone in the reply immediately below it. I would love to hear my system through your amazing speakers!

Thanks. Yes that is the exact system I want. From what I have read it sounds like a good balance.

Cheers for the nice comments. They aren’t overly efficient they are just not a difficult load.

Mine in its rack. I’m sure some would disagree with the placement of the HICAP and NAPSC, but reality creeps in. 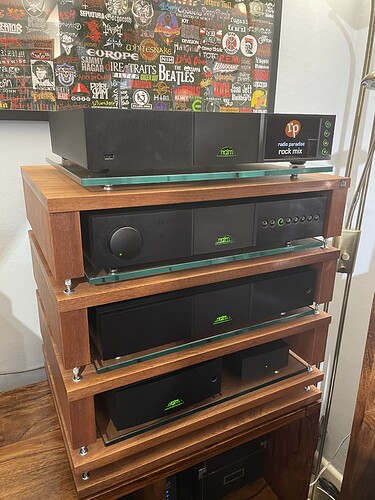 People seem to recommend what they have.

That’s fine for you high Flyer Naim folks but when ever I recommend someone get better speakers I get shot down like a dog in the street.

What speakers do you have with that system?

I think the default response here is that “it’s a Naim forum so what do you expect” but I have to say that the upgrade urge here seems inextricably tied to little more than there being lots of options for upgrades and a complete disconnect from the idea that there is not one absolute path we must all follow. The concept that someone could look at some boxes; see that they work well together and not have any desire to start planning what happens next is largely alien.

It’s often dressed up as “yes, but for the money you have you could do this instead”. I’m not doubting the altruistic motivations behind that but it never occurs that “that” is again not looking for an end point so much as a start point and that actually isn’t where a lot of people are.

I pitched my tent with Naim at CDX2/XPS2 plus 202/200/HCDR and NAPSC because it was a balanced system recommended by Naim; because hearing it was immensely satisfying; because it matched my financial position; because there seemed to me to be few appealing alternatives at those prices; because dealer support appeared good but also because the incremental gains from moving through an upgrade path are largely over-stated in relation to the money spent.

I contemplated (and tried) many changes to my system. The 282 was actually the easiest to reject because the slightly glassy digital quality that some of us hear and the slightly lighter mid range was absolutely not outweighed by the gains in bass control, detail etc. However, even if I’d been happy with a 282 there was a clear sense of lost synergy and an overwhelming sense from others that the solution was not to accept that the 282 had created a problem but to fix the problem with a power supply upgrade or a power amp upgrade. Same when I was loaned an 82, or tried a 555PS on my source and a 300. Some fantastic and indisputable gains but other qualities lost.

The amounts of money involved in that may be nothing to some people but for most they remain an issue as does a bit of common sense. Upgrades are a solution looking for a problem. There if you want them but a bit of a struggle for those who do to understand those who don’t.

I’ve found my system ceased to be satisfactory. Some of that undoubtedly my decision on speakers but, in seeking to resolve that, upgrading still wasn’t the solution. Indeed it has become apparent that there are many alternatives at or below Naim prices which provide equal or more enjoyment; that it’s now possible to reduce the laughable box and finicky cable count and yet maintain or increase your enjoyment and dealer support is increasingly patchy and less relevant as Naim boxes become more of a closed ecosystem.

A long way of saying posters on this thread should listen to what the OP has said and stop saying “yes but”.

Thanks for the time you put into that reply.

I do sometimes find it funny though…. It’s almost like a competition of who can make the most rediculous recommendation. It doesn’t seem to matter what system someone is considering, the recommendations seem to always be the next step up, or sometimes leagues above. I’m going to start throwing the statement in there for a laugh.

I know people are just trying to be helpful but sometimes I shake my head. A common example is someone inquiring about a nova and a Kanta 1 or 2, only to be told that they need a system double the cost to make it work. It’s a bit warped in my opinion. It is a Naim Suggested package and people should really be advocating for Naim on this, not scaring them off. It would sound great I’m sure. For a start If someone is considering a nova, at least consider that this might be the max they can afford or want to afford. Also consider that the speakers will see them through upgrades down the track. Think of the nova like a gateway drug.

Mark, I responded to your precedent post because you said that people here are overlooking the speakers generally.
I know you will go for Ndx2/202/200.
As for your actual response, I would say that I agree that 30k system on 2k speakers is absolutely not optimal.
Neither 2k system with 30k speakers.
But 25k system in 5k speakers will, 90% of the time, sound better vs 5k system in 25k speakers. IMO of course.

I would say that I agree that 30k system on 2k speakers is absolutely not optimal.

LOL - i’ve got a 15K system on some absolutely mint Naim n-SAT speakers, cost me £599 including n-STANDS. The best HiFi move i have ever made throughout my HiFi journey. They sound absolutely phenomenal. Like silly billy phenomenal!

Brilliant… Any chance of a picture?

This is like the complete opposite of my current setup.
I just googled. They aren’t as small as I thought they were?
Is this a full time thing or temporary?

Sure you win, let’s move on.

Certainly not a High Flyer here - way down the Food Chain. Cast offs from the lucky ones who can upgrade & replace, regularly. Almost ALL my system is now pre-loved. I have not bought a new Naim unit since… about 2001. (In fact the only ‘new’ parts I have bought, in recent years, have been LP12 related. )

Hope thats cleared that up… Nothing more to see…

Ah I thought you meant 282/250. I like it that you have been so satisfied with your system for so long.

Dusting & servicing only since then…