Can anyone explain in simple terms, please, the internal differences between the (Olive) NAP250 and the NAP135. Obviously, I know that the 250 is a stereo amp and the 135 is mono, but are they essentially similar internally?

I heard both amps, one after the other, when I chose and bought my system at Grahams HiFi in Islington almost half a lifetime ago now, but I have hardly heard any other Naim equipment since (well, I did attend a launch event for the new 500 series at Grahams a long time ago).

I know nothing at all about audio engineering, so simple words and some nice photos with any explanation would be wonderful.

(And, yes, I will be pestering my dealer to arrange for a place on a Factory Tour if and when Naim re-start these next year.)

I ask these questions, as I expect that quite a few Members know as little as I do about the internals of these lovely amps.

The 135 also has an extra board for the fan control circuitry - this fan is thermally controlled and provides extra cooling for the amp and regulator board output transistors. These transistors are mounted to a heat sink ‘tunnel’ assembly with the fan at one end to draw air through it rather than just using the case as a heat sink as done in the 250. This allows 135s to drive more demanding loads like Saras and Isobariks without shutting down due to thermal tripping.

Thank you, James, for the photo and, especially, the description of what everything is doing in the box. They are beautifully put together.

Just for comparison, this is inside my 180. The caps are under the small board at top left. 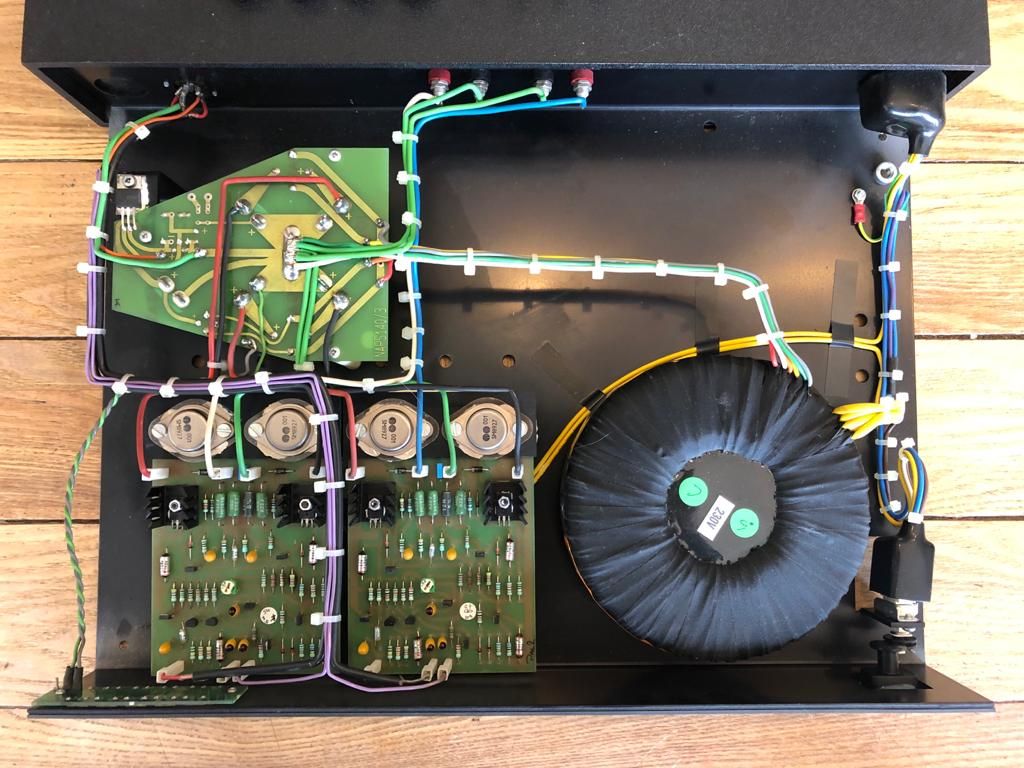 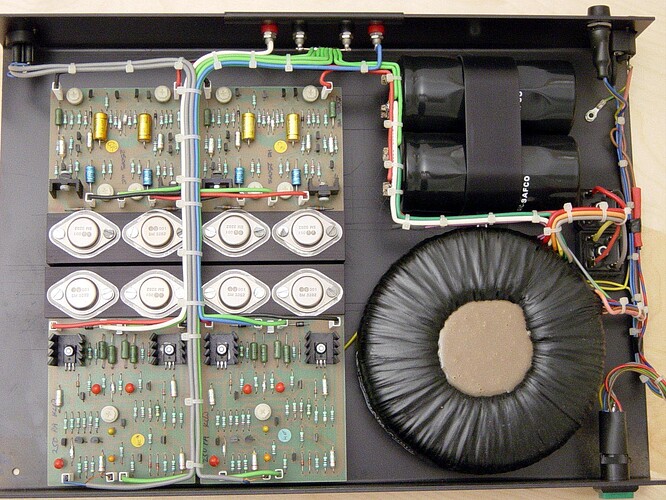 You can see how the 135 gets a full toroidal and a pair of reservoir caps per channel compared with the 250 sharing them.

Great question Graham. It throws the following into my mind:

I know why I prefer the former in each case but I’ll leave others to take this bait.

. Although I would be very interested in opinions. In my mind the former in each case has a very visual argument (as opposed to a scientific one) in terms of the physical layout of the internals as to why some feel they are “better.

I am always intrigued, Paul, when I read of people such as yourself preferring the 52PS to the Supercap. It’s a comment that I’ve seen expressed a number of times over the years, and I always wonder why that should be. When I bought my own NAC52, all those years ago, the 52PS had already been discontinued, so the Supercap was the only option.

First, what are the internal difference between the 52PS and the Supercap?

Second, why did Naim make the change?

Does anyone remember that far back?

the 135 just has one amp board and one regulator board. Both have the same power supply (same size transformer), but this has just one channel to drive in the 135.

In other words it is a monoblock (and the 250 isn’t a “dual monoblock’ with two 135s in one box), which is widely recognised as a beneficial approach for sound quality. I wonder why Naim hasn’t continued to offer the 135, updated in the same way as the 250. Can the 300 and 500 can each be used with 2 power supplies, one per channel, creating the electrical equivalent of monoblocks?

Just made my way back to Naim. I have to say there really isn’t a house sound out there that I prefer more from amplification than that of Naim Audio. I hope to post my detailed impressions regarding my journey away from Naim pretty soon, but for the time being can anybody chime in on any experience they may have had between these 2 power supplies. I’ve searched the forums but I haven’t found a definitive answer. Was the SUPERCAP olive only changed to accommodate other Naim components? Does t…

Yes the 300 is effectively two mono amps sharing a single case and single power supply (and fan control board), albeit in the two box head unit and PSU configuration. IIRC, the two power supply approach (single head unit with two power supplies) has been tried at the factory (with a NAP500 ?) with variable results. It’s certainly been mentioned on here in the past.

Naim found performance advantages with using one extra large toroidal transformer over two smaller independent ones of similar overall cost. Of course you could use two of those same extra large transformers, and we listened to a NAP500 powered by a pair of 500PS units. It did some things that initially sounded rather good - there was this huge airy soundstage - however, it quickly became apparent that this was more of an artefact and that the cohesion of the music was being pulled apart and was more a hifi “effect” than music. IIRC, Roy speculated that it may be down to “parasitic effects” of the unused sides of the power supplies. This would possibly be much improved by designing a dedicated mono supply, but again, we’re back to the findings at the start of this paragraph…

I would hate to think that there may be parasites breeding inside my 135s. I shall ask my dealer to instruct Naim to give the internals a strong dose of insecticide when they go back to Salisbury for servicing.

I am always intrigued, Paul, when I read of people such as yourself preferring the 52PS to the Supercap.

I think the reality is that listening to my system these days I am completely satisfied with the sound. I suppose I prefer the 52ps because I don’t feel it’s lacking in any way. I’d do like the beefier internals but that’s not a scientific reason for saying it sounds better than an sc. I could probably just as easily have ended up with a sc all those years ago but my 52 was what was out there when I was looking to buy. My only conundrum now is whether to put an XPS on my NDX. Every time I think I’ve decided to I listen to it and come to the conclusion that it doesn’t need it. I think I might actually have found my perfect set up after all these years.

We may be getting off-topic, but the PS options are interesting to me.

The biggest problem with the 52PS is that they are almost never sold in isolation, so I don’t see how I could get one. The alternative of 52 + SCDR hadn’t occurred to me until I heard 52 + 300DR. However, I doubt my old ears will get too excited about the difference from swapping PS anyway.

I don’t know about the advantages of splitting your 2 boxes into control and power (a la 300) or 2 monoblocks (a la 135), though @Richard.Dane 's comments are as usual informative. However, I can say that I had heard a 300 and not been at all enthusiastic (largely because it wasn’t enthusiastic or engaging). I found 300DR to be a very different beast - I bought one. Had I already got 135s, the gap versus 300DR might have been more ‘different’ and less ‘better’, so which is best will be driven by room, speakers and personal preferences.

As for @graham55 ‘s other question - 52 versus 252, isn’t that the easiest choice of the lot, however the components’ differences explain the sound differences?

They pop up on eBay now and again. There was one a couple of weeks back. Can’t remember what it went for. I’m sure some people are still “upgrading” to the Supercap even now.

Be careful here. Some of us within Naim used old 52PS units converted into what were essentially super-Hicaps (great on a Prefix). IIRC the Burndy feeds were disconnected so you can’t use one of these on a NAC52. There are doubtless a few of these “out in the wild”, so to speak.

Thanks Richard - that’s another reason to tread carefully.

Can I just check here, please, Richard, that you were using an entire 52PS to power a Prefix? Did this result in styluses (styli?) leaping out of the LP grooves or other forms of mayhem?

Well, I suppose, why not, if you can…

Presumably this could be re-engineered back to stock relatively easily? Assuming it was just that the Burndy wires were disconnected.