The instructions are not clear.

The snaic and burndy direction is shown in all amplifier manuals, but apparently the interconnect direction isn’t, at least I could not find it - and the NDX2 leaflet is of little help

Just so that I am really clear (sorry) the band on the the 5 pin Snaic interconnect between NDX 2 and 252 is nearer to the NDX2?

And just to avoid confusion, the interconnect is an interconnect and not a SNAIC. A bit more info here in the FAQ;

How to identify SNAICs and Interconnects Frequently Asked Questions

Standard Naim Interconnects. Interconnects carry only audio signals. Naim usually include a standard grey Interconnect in the box with sources. It is no after-thought, but rather a great sounding high performance cable that complements Naim equipment perfectly. [Naim 5-5 Interconnect1|600x434] Pictured above - standard Naim interconnect. Grey or grey with a slight lavender tinge outer sheath, DIN5 (180) at both ends, green direction band. Used for connecting signal from sources such as a N…

An arrow would be helpful. Not a band.

Though only if it said what it means

Like an Arrow with the text “source” next to it. But even then it may not be totally clear with snaics like between 252 and SC, without a glance into the instructions.

My Chord Sarums have arrows and I would not have known if they are supposed to point to the signal source or to the direction of signal travel, if the leaflet had not told me

Seems to me that what’s really missing is instructions in the NDX2 quick start guide. The band would probably have worked for you if the guide had told you what to do with it

If I see an arrow it would mean the direction in which the music flows.
Ndx2>282>power amp>speakers.
Same thing with power supplies.
Xspdr>Ndx2
HC>282.
Etc.
Or colour code each end.

It’s not that simple though. In the case of the NDX and XPS the band goes at the NDX end. There is no music signal in the lead, just power. The best solution is really a decent manual, or at least clarity in the quick start guide.

So not even consistent then. I assumed ( better check mine now) that the band or arrow would be at the source end( in the case of a power supply, the source of the power).
And yes, decent instructions may help.

It’s simple - the direction marker band always goes at the end that is the source of the music signal. Hence XPS band goes at the NDX end.

in the case of a power supply, the source of the power).

It is inconsistent, just not so easy. In the PS case, the source of the music is the head unit and its signal modulates the higher current in the PS.

But at least in the snaic and burndy cases, it is all pretty clearly laid out in the manuals. For the sources not so much maybe, at least not in the NDX2’s missing manual (and no info in the quick guide that I can see)

If I see an arrow it would mean the direction in which the music flows.

Yeah, but that’s for you. Can’t assume that this is the universal automatic understanding. I am sure if there were arrows he questions would be “which way should the arrows point?”

How about an arrow, then an explanation?
Colours at both end works the best? Idiot proof. 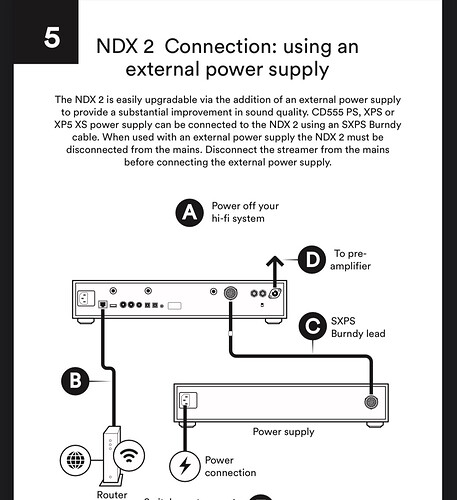 Richard, it’s simple to you and it’s simple to me. We’ve owned Naim systems since some Forum members were in nappies and we can wire up Naim systems with our eyes closed. In the case of the interconnect, the quick start guide could be clearer. Maybe @Naim.Marketing could add this to the never ending list of improvements. It could be changed online really easily, though the physical versions would take longer.

Nigel, by simple I mean the concept of “band at source of music end”. That’s all anyone needs to know, and from there it’s relatively simple to work out without the need for illustrations, special arrows etc., but yes, I take your point, one can always work towards trying to make things clearer and easier to understand.

Funny you talk about wiring up Naim systems with eyes closed; hooking up a system while blindfolded was part of dealer training at the factory. The banded collar really helped with that - printed arrows wouldn’t have been so easy.

Here is the ‘what’s in the box’ page. All it needs is to actually show the band on the cable, and then say ‘band at source end’. Job done.

Of course, the dealer is there to advise. Or at least, they are meant to. 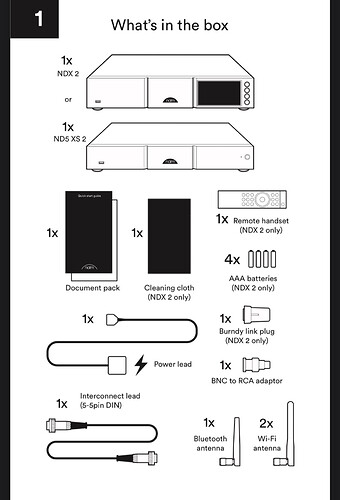