I’m loving the Nova. It would have been nice to hear them side by side, but there is a vast difference between the Atom and Nova. There is a depth, or a fullness to the Nova’s presentation. I’m plugged into a cheap powerstrip (which is plugged into a new dedicated circuit.) When the Powerline arrives I’ll plug directly into the wall. I have the electrician returning to add another dedicated line in a different spot (to allow me to move the system) and a second near the first. He used 12-3 romex on the one I’ve had done already…that should be fine eh? The Nova draws 140 watts, that’s 1.167 amps correct? I’m having a second placed near the first that will power the TV and router and modem. That will have the Nova alone on it’s circuit. Should the breaker be a 20 amp?

As far as i understand any (even very small) amount of DC Offset will “excite” the transformator, which usually results in vibrations and therefore mechanical hum. This also creates additional heat. Try to put your hand on the right side where the transformator is located and see if you can feel that something is vibrating. Every transformator reacts differently so it may be worth trying a DC Blocker even if your transformator does not produce any audible hum.

There are 2 new “cheap” ones from Ifi Audio and Audiolab, i use a Supra LoRad in my system which is kind of overbuilt and expensive but does work.

He used 12-3 romex on the one I’ve had done already…that should be fine eh? The Nova draws 140 watts, that’s 1.167 amps correct? I’m having a second placed near the first that will power the TV and router and modem. That will have the Nova alone on it’s circuit. Should the breaker be a 20 amp?

I am out of my depth with the electrical details, but a separate line is always great to have. As for the breaker, I would guess the higher it can legally be rated, the better. The Naim amp manual recommends 30 or 45 amps, but this may well be aimed at the way the electrical installations are done in the UK, which I believe is quite different to mainland Europe and possibly also the US; of course, your voltage differs as well:

Great. My Nova should have as good an environment possible. Now, as I said the sound is thrilling. Do you also have a DC blocker? or something that eliminates the need?

I don’t have a DC blocker and haven’t yet investigated the topic as I am lucky to have no issues with transformer hum. @conlegno above is less blessed and forced to know more about the topic. In general, it is a complex issue and hum can have many different causes, which consequently require different solutions. (E.g., in cases where hum is caused by mains pollution coming from a different tenant on the same electrical subnet, not even a dedicated mains in your house may help). There is a great thread going into all the annoying details here:

I have a Nova in our lounge and it always runs warm to hot when playing at a decent volume, nothing to worry about I feel. I have a Powerline on it and use A Isotek power strip that includes power filtering, which improved the clarity and reduced the noise floor - we have reasonably “noisy” mains.

Now be warned. That was the main system and it replaced an UnitiQute2. I like music loud that you can feel, with detail and without distortion. I upgraded to a SN2/NDX2, then added the power supplies. Now I have a used 252 using the SN2 as a power amp until a new 250 arrives. So, mind that rabbit hole and maybe enjoy what you have for now.

I have a Nova in our lounge and it always runs warm to hot when playing at a decent volume, nothing to worry about I feel

In airedog’s case, it shut off due to heat protection - at least with the previous AQ speaker cables. So that was worrisome, which is why we talked him into trying with NACA5. I don’t think we can say yet if this made a difference to the shutting off.

I don’t think we can say yet if this made a difference to the shutting off.

Correct. Yesterday as I was grooving and feeling the music (lol) I chickened out and used the fan as it was getting pretty hot. Does our hive here think today I should give it a run without the fan? I could play the same stuff as the other day when it shut off. I was hesitant to do that…afraid of damage. But Sued said it’ll shut down before damage happens…where’s Clare? She hasn’t poked her head in here in a while…

I am convinced that the heat protection is there to kick in before damage occurs. At least in the amp manual for the 300 it states: 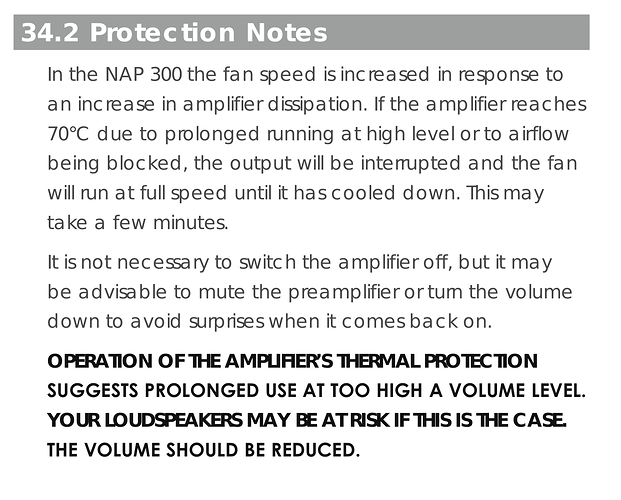 So if it was me, I would just try with the fan. If there is no difference to the AQ cables, at least you know. And if you talk to Naim support (which I would do: support@naimaudio.com), you can at least tell them that yes, you tried with NACA5 and it did not change.

Clare has not answered here because she has not been part of the discussion in this thread. She participated in a parallel discussion of the same issue in another thread, around here:

I really would pay heed to the comments re cables. I’ve run my Nova VERY hard - even in high temps - and it’s never once tripped the thermal cut-out. I’m using NAC A5 and it’s sitting on a humble Naim Fraim shelf (not a Fraim, just the shelf/supports)

Based on this comment by Clare, if yours still shuts off even with NACA5, I would definitely ask support@naimaudio.com if this is to be expected

If there is no difference to the AQ cables,

Well I do think the cables made a difference, it did seem to not heat as fast or as hot. But it did get hot when I was pushing…not as hot probably, but hot. About fan vs no fan, to push without the fan would tell me because the fan eliminated the problem with the AQs. The NAC A5s as I said, I believe, improved the sound. I do really feel good about the Nova; I did make the joke ( on that thread) that the Nova will be my last purchase!

Yeah, like I said yesterday: If it now gets hot but does not shut off, I would consider it an improvement and would think it’s fine. The thermal protection will hopefully know when it has to step in.

You will only know when trying without your big fan, I guess. If it still trips the thermal cut-out, I would definitely speak with support@naimaudio.com and ask them - because it doesn’t do that for Clare according to the above comment, even if driven “VERY hard”

Right. Later today I’ll give it a run.

Is this new? which allows to jump to a spot rather than scroll? Yay! 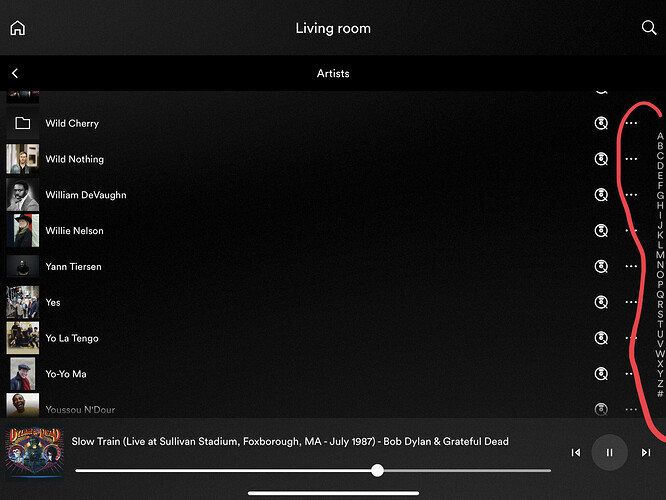 Is this new? which allows to jump to a spot rather than scroll? Yay!

No, I think this always existed, but I think it is displayed only in the full view (after clicking More at the bottom of the preview). It’s pretty cool but only exists on iOS, sadly. No such thing for us Android users

Ha…I give up! Simon and Garfunkel at 65 just made me submit! Still barely hot. Yeah…the cables are making a difference. Plus Apple Music Hi-res kicked in today…

Glad to hear that NACA5 is making a positive difference.