I’ve had a very interesting 2 weeks while playing around with said Power supply’s, yesterday with the help of a extra set of ears on the job the final conclusion was arrived at.
Firstly I think it’s important to note that I have 52/135 sl2 all serviced olives system.
I started out with my new s/h purchase of a 555ps dr. Had that hooked up for a full week. Unfortunately it didn’t do it for me, detail was up a wee bit but the base was over weighted which seem to affect the lower mids in my room I would even call it over based, plus it was missing that fairy dust fun factor The Synergy just didn’t work with my olives. After telling a mate about that he offered to bring over his 555ps. Well this was much more suitable to the system and reminded me of the older olive xps, however that to was like it was on steroids, it made the gain from the cds2 go through the roof plus I think it showed a few issues up of cds2 and the era of technology. Then back to the olive xps. My goodness what a relief. Things just sat back but yet still gave a good wet fish slap when required, the sound stage was just as good as the 555Ps’s and the gain was back to an enjoyable volume. So this is my big hifi lesson for the year, even though it’s better and cost a lot more money its not necessarily going to be better when married to a different generation of boxes.
So I have decided to keep the olive xps as it sounds best on my olive kit. Guess I’ll have to move the t555ps dr on now…that was a short affair☹️

Thanks for this @anon32455950, useful comparison, not that I was even thinking of upping the ps on my cds2. Sitting here listening to cds2-xps, 82-sc, 250, mkii sbl’s, and loving the cohesion and synergy of the system. I know there is better out there, but the magic of this system dictates leaving well alone and enjoying it. Will you be experimenting with an xps2?

Hi Graeme, no I won’t be playing around with a xps2 or a dr’d one. The system synergy is overwhelmingly obvious, I thought because the olive xps has only a 400 v transformer and the 555ps dr has a much larger everything it would be better. Well I got that wrong, the olive xps was made the way it was for a reason and works best on the olive gear imo.
I couldn’t get a chance to try the 555ps dr before the purchase, when it comes to naim I’ve found most so called “upgrades” work out fine so I had faith, not to worry These things happen from time to time. I’m sure if I had cds3 that would be a different story.

Did the 555DR come with a Powerline? Do you try an ordinary mains cable on the 555s? I suspect that PLs are an all or nothing thing.

Well I got that wrong, the olive xps was made the way it was for a reason and works best on the olive gear imo.

The XPS2 is virtually the same as the olive xps apart from the transformer, which was designed specifically for the voltage requirements of the CDS3 (and CDS2).

Hi Phill, yes had a powerline in use. a/b the PL against the standard mains cable. The PL was way better on the the 555’s ps. Never could get on with the PL on the 1988 135’s.
At the moment the PL is on the olive xps and seems to work fine, but I’ll probably change it out to the standard mains cable after Xmas as I have an out of town friend coming to stay. So another opinion to be had. Cheers

Obviously different people hear and prefer different presentations. The room also comes into the equation.
In my system the 555PS was waaaaay better than an XPS - albeit that this was on a CDX2.

I think what the 555ps did was pulled every little bit out of the cds2 into the 52 and down the line into sl2. The system is very very revealing and really doesn’t like to be disturbed eg powering down and on box movement etc , seem to take a week to get back on song.
Anyway It’s hard to explain, kinda like the 555 brought it all to the front but yet the vocals fell back into the soundstage, where the xps the soundstage was more relaxed then vocals and any instrument lead break would come forward.
The 555ps probably showed up system issues. Also having a phased mana rack is only going to exacerbate any issues imo. I’ll probably put the 555dr back on the system tonight so it’s in full flight by the 27th when my buddy comes up to stay. He has been around hifi a lot longer than I, so it would be interesting to get his opinion.

Where the 555PS helped most for me was in more complex music and orchestral pieces. The separate strands were easier to follow and the whole presentation was opened up.

Yes agree completely. More control, but to my ears less music on my Olive system. This is why I suggest system Synergy.

It’s sounds like a mains issue as well. Don’t know your mains arrangement, but with all those 135s you could try and order them as power*4, pre and then sources. The MusicWorks Reflex Ultr G3 mains block with sparkly bottom has worked a treat for quite a few of us, but the poweramp stays on the wall. It about reducing mains noise.

Is the Power Supply in your original comment for the CDs2 or the Nac 52? If it was for the Nac 52 wouldn’t an Olive Super Cap of been better.

Hi Phil, as far as mains is concerned I have a very serious main spur to the boxes, over here we are able to piggyback our plugs so I piggyback them amps, SuperCap, xps. Played around with plug position and this is definitely the best one.
It is an ultra revealing system. I really should take the money from the 555 and start heading down the LP twelve Avenue I feel

Some reckon that a bit of space between plugs helps. Not sure what piggybacking of plugs looks like.

Found this. Lots of space on the racks.

[image] The love of my life.

I have a direct mains spur from the stereo wall plug to the mains board. Then a 50 mm sq earth wire to a copper earth stake out by the garden tap. The impedance is almost zero. Think I have the power supply well and truly covered.
Piggy backed pugs, in this country this is absolutely fine and legal. You can see that we have different socket so the powerline plug is removed by the importer and replaced with a local standard wall plug. I guess you can also see how this type of plug configuration Works so well. 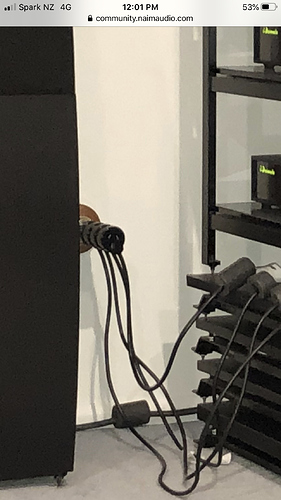 not sure your conclusions are final with such an arrangement.

Ideally each Naim PSU should have it’s own socket.

To each their own though.

Apparently in New Zealand this is what is preferred.

Yes, it’s fine as the piggy back plugs are a pass through arrangement. I moved to IsoTek power boards though to help with addressing mains noise and tidy things up.

Would be interesting to try. I will admit.