Ovator boxes are massive. If you live in London, the price per year is quite high given that they take a lot of space. What you can do though, is store the other Naim boxes in it. I have e.g. my SBL boxes stored within the Ovator boxes.

Enjoy how easy the Ovators go down to under 25hz.

Naim’s recommended systems in the time of Ovators really needed to be taken with a few pinches of salt, if not the whole packet.

I bought a Naim recommended system in 2004 before the ovators existed. This was the system 4 which consisted of CDS3+XPS2+252+SUPERCAP+300+300PS+SL2. i think at the time the 202 and 200 were suggested with the CDX2 and Allae speakers in system number 2. Sort of made sense these suggestions.
I don’t know about ovators but would think they need stronger amplification. Rather than another hankering thread and the subsequent egging on from everyone to climb Everest, i would recommend to see how you get on with them before changing anything.

Nice choice, I have both S400 and S600s.
600s should ship with the BMR securing bolts in place - remember to remove as part of final set up.
Speaker units will benefit from checking the torque settings. Loosen and then reset each.
There was a thread last year, to which I contributed.
OvatorS600 - torque settings - can’t seem to post a working link

Ovator S600s Naim staff have suggested were voiced to NAP300, so that is maybe the natural partner.
When I first acquired S600s, I had been active with 135s/SBLs. Briefly 135 passive, awaiting a BMR Snaxo, then 4 pack.
Subsequently swapped in a pair of NAP300DRs, a third NAP300DR added still more.

As @hungryhalibut so often correctly asserts, it is a lot of electronics, to run a full active setup.
I run mine across four stacks of Fraim and it entailed a special order length for one i/c and three longer powerlines.
I have the space, no room for the kitchen sink on my fraims mind. The result as my visiting dealer a week ago commented, is it all gels well.

Hello to everyone. I bought the Ovator s-600 about a year & a half ago & since they were already used for about 5+ years I am thinking to check the torque settings. I searched the forum & I found various topics but no topic refers to the exact numbers. I would be grateful if anyone can provide me the exact torque numbers of the woofers, the BMR (front & back) & the crossover. Thanks in advance.

Anyone on the lookout for S400s, HH has listed the five colours earlier.
In theory there is a sixth - just as the change for Fraim, Naim changed the colour of S400 Cherry from what I term “yellow” cherry, to “red” cherry.
IIRC Naim describe two forms of “tint” - which I think can be confusing.

Thanks Richard, I was trying to post the link without the text, so it looks like it includes the title and the OP’s opening remarks.

Yes, the whole Cherry thing can be very confusing as it’s not the first time that the cherry tinting changed at Naim (it did so earlier with the previous speakers and with Fraim - going from a more orangey tint to a lighter one). To compound things, cherry tends to change quite a bit with age and light, which mercifully does seem to even out any differences over time.

I already had yellow cherry S600s when I bought unseen an ex-demo pair of cherry S400s and they turned up, one box never opened, used as a static display, but were the red variant.
IMHO, the latter is way too flat and uninspiring - they sound good mind; rosewood is very much nicer.
Richard, there is a photo which originated from Naim of the different colours for the fraim, if you don’t have a copy I can send you one.

Ok guys I’ve taken onboard what most here have said - I’ve managed to cancel the order for S-600s. I agree with HH, it’s a daft idea. The hankering for Ash 400’s lives on… thanks for the reality check😵‍💫

Maybe investigate other Karl-Heinz Fink speaker designs that might fit better both domestically and with supernait as amplifier.

Maybe wait until a pair of S800’s becomes available?

Now they are big! There’s a pair in the statement test rig at the factory.

Stephen, if … after the nsats…. you’re looking for a follow on from neat sx2, then try proac d20r. Perfect for a supernait.

….is the right answer!

Just keep a lid on the upgraditis and listen to your head and not your heart, and do try to home demo if you can. It will avoid any mistakes from over-excitement.

There was a pair of S400s on eBay recently in Zebrano, which looked very nice, with just one small blemish. You could probably accommodate something as bold as zebrano as a statement.

I would look for a pair of S400s at a dealer, go look at them and if they appear to fit aesthetically, see if you can organise a home demo or at least buy them with a money back guarantee if they don’t work out for you.

There seems to be a few at UK dealers. It might mean a bit of travel and faff but it will be worth it to get the right solution aesthetically and sonically.

That’s a great suggestion. I did it a few months back to check the impact of a larger pair of stand mount speakers: 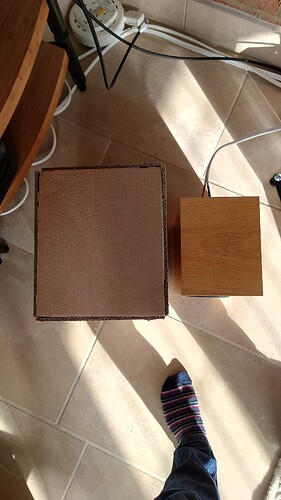 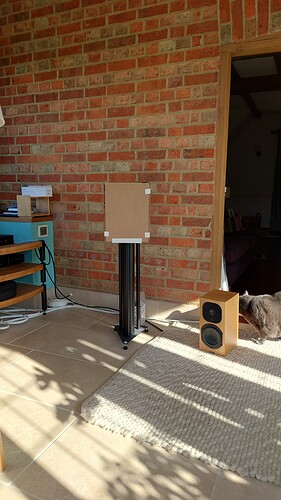 Really helped visualise what they’d look like in situ.

I’m not sure where one would get enough cardboard to mock up some floorstanders though, not without buying a pair

I didn’t want to rain on your parade Stephen so held off with my observation on having owned both S600 & S400 that (and this is with a Nap300) the S400 was the better loudspeaker only in as much as it didn’t have the problems of the S600 I encountered in my 5m x 6m x 3m(h) living room. Namely no bass and what was there timed poorly. The day they left the house was a blessed relief.