Show us your guitars!

Another stunner! And look at all those guitar cases behind it? How many guitars have you got?!

Currently I have 5 guitars, which I know is a modest number compared to some. Four acoustics including the Lowden, an elderly classical guitar by John Ainsworth and a National El Trovador, plus one electric - a Gibson 339. I have had a custom Fylde on order for some 18 months now, should hopefully arrive sometime in the next 6 months. I’ll post some more photos if people are interested.

I’ve seen it done, but “asked a friend” to be sure.

His explanation, binding being the edge strips that look a bit like plywood edge on, purfling is the fancy pattern strips, chequer board or Tunbridgeware effect.

Seeing a groove cut by hand around the edge of a violin front has my total admiration.

Definitely interested, and I think I can safely speak for a number of others here as well.

Not quite my style, but that’s a stunner by any measure.

Here are a couple from my collection. 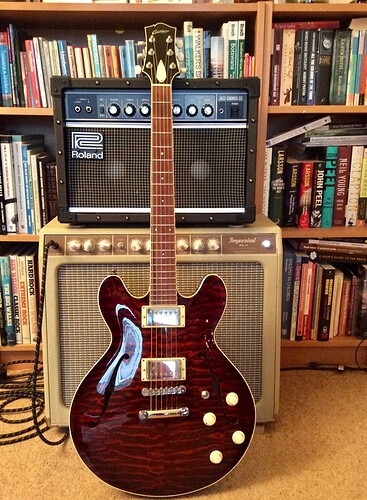 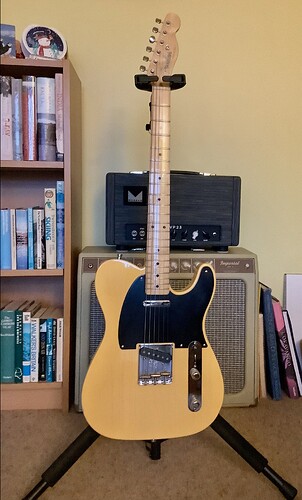 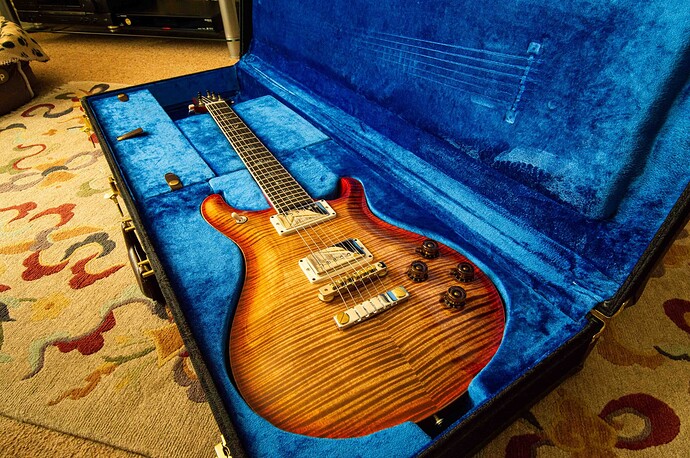 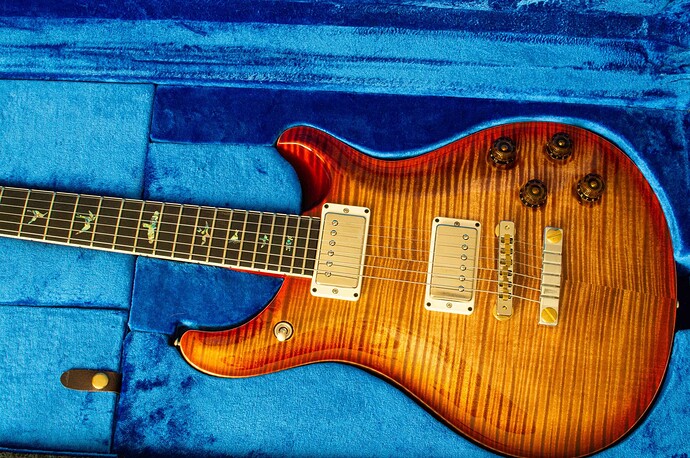 Another view of the PRS 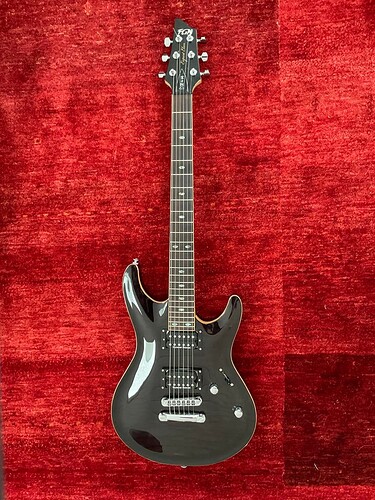 New guitar day! This one is admittedly a bit odd. It’s FGN Expert Elan. FGN are a pretty big Japanese maker, but mostly make guitars for other brands like Ibanez, so they’re not well known in the retail space, particularly in North America…

This one is from 2011, but it is brand new. It was brought Canada ahead of a distribution deal that fell through and then sat in storage for about 10 years. I bought it unseen, unplayed and unheard, but I have to say, I think it’s a stunner. It feels alive. Sounds great. Meticulous fit and finish. Wider neck than by Tele, but I’m getting used to that pretty quickly.

Bill Collings was one of the most universally respected people in luthiery. BobTaylor flew back from Europe to attend his funeral and wrote that Collings guitars are the only ones he sees where he wouldn’t make any changes to them. My D2H is almost certainly a lifetime keeper…of course, that may not be so long at this point in my life.

After posting on system pics, it was suggested that I post here. 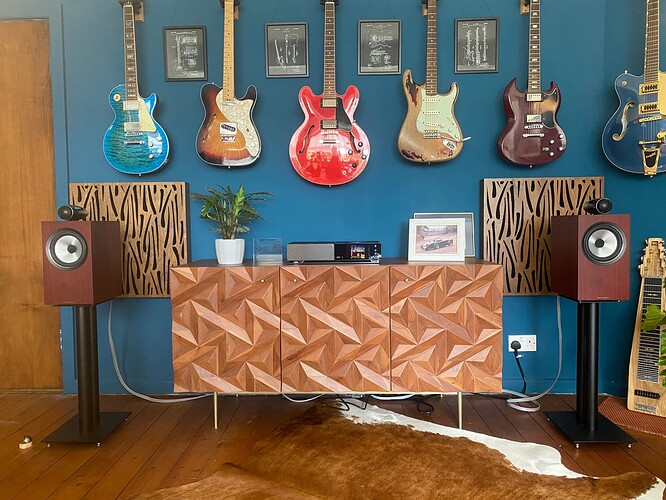 Actually there’s a few more, I tried to take a wide angled pic… 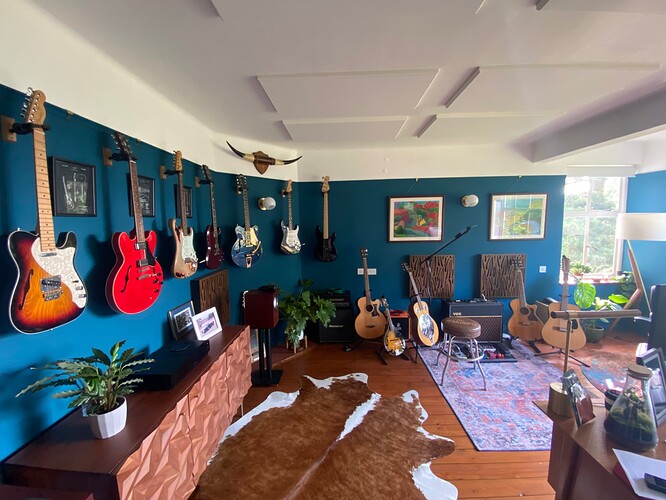 Now that’s what I call a fun room!

Not to give you my guitar life story, but they are (dates from memory…)

A 2014 Les Paul Standard 100 in Ocean Quilt
A 2015 fender tele slimline (that I picked up from the factory in corona)
A 2013 Gibson 335 I bought in New Orleans
A fender custom shop Rory Gallagher
A Gibson sg, mid eighties, picked up from a vintage guitar place in Miami
A Gretsch blue and gold special edition
A late 80s Squier strat (Korean), my first guitar, bought second hand in 1993
A fender Roger Waters replica P Bass
A Tanglewood acoustic bass
An Adam Black resonator
A Fender 12 string acoustic
A Turner 6 string acoustic

Tough to pick a favourite, but the slimline tele is amazingly versatile, the 335 has an incredible tone, and the Rory Gallagher strat is incredible.

Thats a lot of Guitars. I only have 8…

Yeah, it is quite PRS-like in concept. It has a bolt-on neck, though. I think your Custom 24 is a 1-piece?

Yes, my Custom 24 has a set neck. The finish on mine is called Leprechaun, I think.

My local guitar shop has a nice used Gibson Flying V. I’m trying to persuade “the boss” to let me buy it. She says I’ve got too many guitars already (sigh) 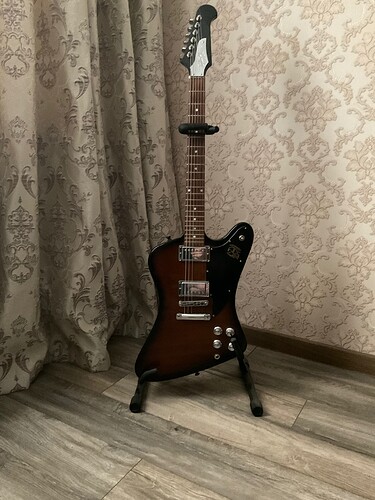 image1920×2560 435 KB
A fairly light mahogany body, glossy nitrocellulose varnish, a through-through red neck with a Soloist profile (I don’t know why they called it that, if we speak in more familiar words, it is closer to slim, thin), a standard beaker of 24.75. Thanks to the through-neck and light body, this beauty has an insanely powerful attack and a dense sustain. The iconic Gibson 500T and 496R sensors were put on this model - they are more familiar to Gibson in general (especially often you can meet them on the Expander and Flying V) than like the standard Firebird model, and they were placed in a chrome frame, which looks very stylish, well, the classic thoroughbred Gibson sound is provided. Gforce pegs, which allow you to quickly reinstall the tool in different formations, well, or just maintain a certain one, and they may well work like ordinary pegs. Titanium sill, which can be easily lifted up/down. Well, the awesome design of the New version, where the usual elements are made in chrome, and everything is in moderation - restrained and stylish. In general, an easy and practical tool that is ideal for both home games and active studio and concert activities.
6 Likes
← previous page next page →