You should consider entering your work in this contest:

There are loads of threads and pictures of peoples wonderful and sometimes obsessive efforts at keeping their cables and interconnects tidy and optimised. In the interest of inclusion and a non discriminatory environment ( probably prompted by Dr Cox) I would like to provide a safe and understanding thread for those who,like me, don’t give a toss and cannot be arsed. No politics, virus stuff or mentions of Phil. My mess… [20210412_094339] [20210412_094358]

I’m gonna group them and tidy, but slightly paranoid because everything I read clearly states the hiline, burndys sound better if not touching anything etc etc…

I’m presuming group the powers and keep the signals and data’s separate?

From an EMI point of view the worst thing you can do it bundle them all together.

I thought it would be fine with the powers? 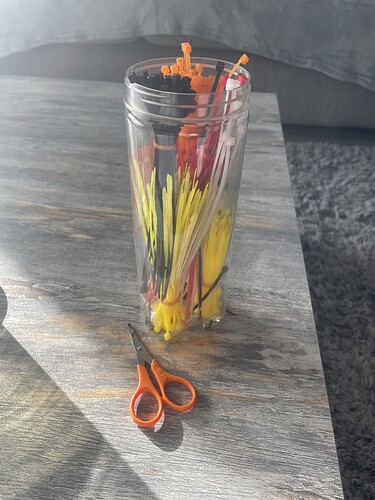 Tidy can look messy. Don’t bundle them all together just to look good. Essentially:

I guess that’s about it. The result will most likely look messy, but will be mechanically and electrically sound.

Thanks so much for the advice!

Don’t forget to come back with the “after” photo of course! 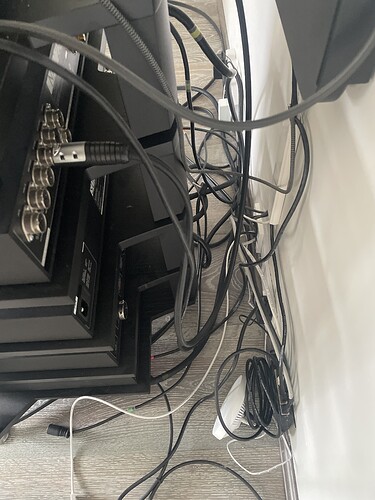 I see now the HiLine, obviously there is no locking collar on that one, it has the mechanical decoupling built-in, so to speak.

HiLine, pushed all the way in, then a light pull back till you hit a bite so it’s got a few mm gap between connectors.
If that’s a WiFI access point on the floor (round white device) I’d be inclined to move it away from the rack a bit if you can, ideally you want them to be high up in the room if possible, on top a cupboard etc.
Coming together though with the tidy up!

What order should the boxes be in?
Before I go any further…

Soz to be such a noooob

Good point. Ideally two racks, with brawn on the right (as the transformers in most PSes are on the right, so this keeps them even farther away). In one rack, PSes at the bottom, sources at the top.

Most people seem to say the pre at the top, some vigorously so

However there are also proponents of NDX at the top, and experienced dealers who do it this way. (I wonder if it makes a difference if there is a turntable on a wall bracket above - may want to maximize distance between the motor and the pre in this case, so might be an argument for NDX at the top).

I’m unsure about the order of the PSes. Main consideration is probably the cabling, but I have two racks and never tried what’s best with with one.
Given the snaic and burndy lengths, I suppose “don’t touch floor” may be impossible anyways (?)

No worries, first of all, if all of this really makes a difference there really should be a cable dressing guide by Naim for common setups. Second, I was the same noob a few months ago, I just spent too much time on the forum reading and thinking about these things. So it’s only fair if I try to give some of it back to the forum where I can.

Just a quick one, how do I clean this lot up?

Good luck with that

I think your stacking order is correct. No need for two stacks, unless you have money, space and plans for expansion.

Thanks mate
I shouldn’t be a noob but things have moved on so much!!

Only just getting back into it! And boy it’s been missed…

Then you are way ahead of me

My only Naim was a CD5i for 10 years, you know what happened recently

What I mentioned in the in-ear headphone thread the other night. The whole pile of boxes in one go

I thought it would be fine with the powers?

Anyway, I AM RETIRED from all that stuff…(even if I was chatting on the phone just yesterday to an old friend who is the current head of our EMC Group).