Thought I’d treat myself to to one of the new digital pressure gauges. I’ve got an old Ortofon one, but have never really liked the non-linear scale.

Ordered a Flybiz one from Amazon for £8.99, having seen that they nearly all look the same. I suspect they all come out of the same Chinese factory, but have different brand-names stuck on them.

Came this morning. Crap instructions supplied with it. Wouldn’t stay zeroed. Gave up on it after trying recalibration and have returned it for a refund.

Not having much luck with some stuff from Amazon recently.

You’ll be wanting one of these… 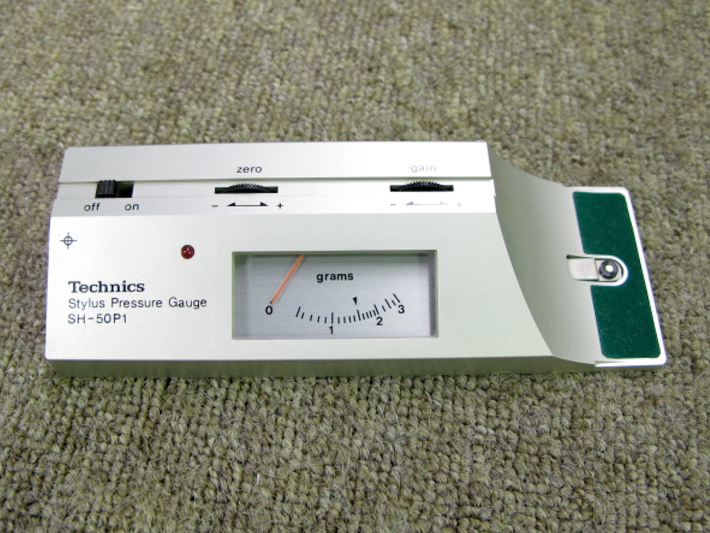 Good enough to be used by Naim for setting up Aros prior to testing during production.

I use one too, and it’s a delight in every way.

David Price wrote a nice little piece on this one at zStereo;

This beautiful electronic stylus pressure gauge was originally designed to be bundled with Technics’ EPA-500 tonearm, itself made to match the SP-10mkII transcription turntable. It was also m… 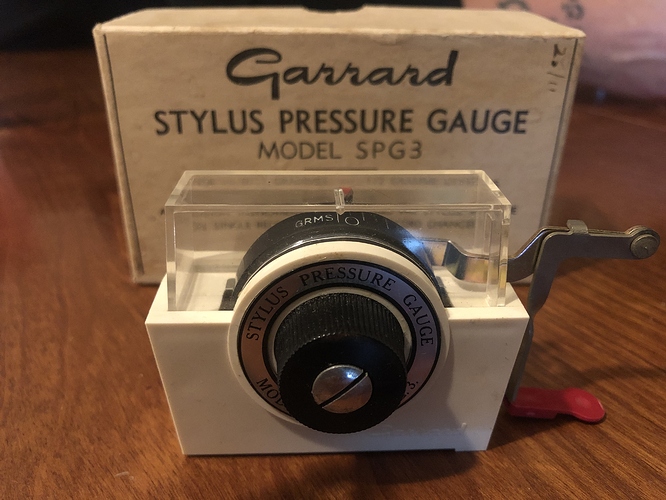 You may have been unlucky. I bought a jewelry scale from Amazon a few years back for about a tenner. I bent up a thin strip of aluminium in a “z” shape and fixed it onto the scale with double sided tape. This gets the stylus height correct. It works very well.

I wonder why they’re called pressure gauges, they don’t actually measure pressure. The scale indicates they measure Mass (g), but is this correct, don’t they measure force (N).

Maybe bad luck, I have the same from “Hossom”. It stays zeroed just fine so far and measures the same weight every time I try. The instructions are really not the best but somewhat delightful and I thought good enough to figure it out. Though now Richard put me on the hunt for this Technics

I have a similar gauge, and I have the same problem with it. Here’s how I get it to work.

First thing you’ll need is a set of calibration weights. They’re not expensive. I use the 2g weight for testing, as it’s the closest to the 1.75g my Kandid needs. My set has 2 x 2g weights, and I sometimes alternate them, to be sure.

Whenever I use the gauge, I first turn it on, and leave it on and in position for at least a few minutes. It nearly always eventually stabilises. I suspect temperature plays a part, as I keep mine in the basement, where it’s always a few degrees cooler. Because it shuts off after a few minutes, it may be necessary to turn it on again a couple of times.

Whether or not it settles at exactly zero, next step is to carefully place the 2g weight in the centre of the pan using the small tweezers. The readout may stabilise a little above or below 2g. Typically, mine might be off by a couple of hundredths of a gram, which is is an incredibly tiny amount of weight, and I don’t begrudge it the slight inaccuracy. Whatever the difference, I add or subtract from the tracking weight reading. I may need to repeat these steps a few times to get a reading I’m happy with.

If you are on the lookout for one, make sure it comes with the plastic cover for the weighing end - this also holds the little calibration weight, which is essential.

I bought on of the cheapie ones from Amazon, but am not sure I trust it.

I’ve always felt that non-digital ones are more likely to be correct provided they were calibrated accurately in the first place, especially if using any kind of counterweight which ought to be a fairly fixed factor.

Perhaps I’m wrong but if a digital one is calibrated with a given weight, it’s not clear how accurate the ‘curve’ would be for incremental weights from zero to above the calibration weight.

I have some small see-saw type gauge, maybe from Ortofon, many years ago I can’t locate currently - cheap and a bit tricky to use from memory but I’d imagine it was pretty accurate based on a known counterwight and points on the other side at set distances from the fulcrum to see if you match a particular tracking weight.

I’m probably missing something here but I have never got my head around why there is a need for laboratory level accuracy in a stylus pressure gauge. It seems to me that you want something that is accurate to say 1/10 gram so that it is working within the designed range and then tune it by ear. Most cartridge makers specify a fairly wide range that even a cheap guage can improve on - I aim for the mid point and then fiddle. The only use I can see is if you frequently swap your cartridges around so that you repeat an earlier setting.

Ortofon balance for me !

Completely agree…and at the end of this process, for interest, you might measure what you have discovered to be the best force (as noted earlier in the thread, expressed as weight).

I’m with @Richard.Dane here, the Technics is a joy to use.

If you are buying used, look for the little weight on the right side of the picture. Otherwise the gauge is nearly useless.

I use one of these (Project 4012) digital stylus pressure gauges. Pretty cheap, easy to obtain and pretty effective. 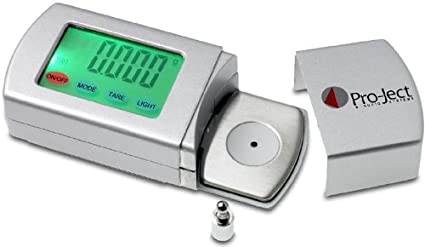 I also still have my Transcriptors Stylus Pressure Scales which I purchased in the early 70s as a manual backup. 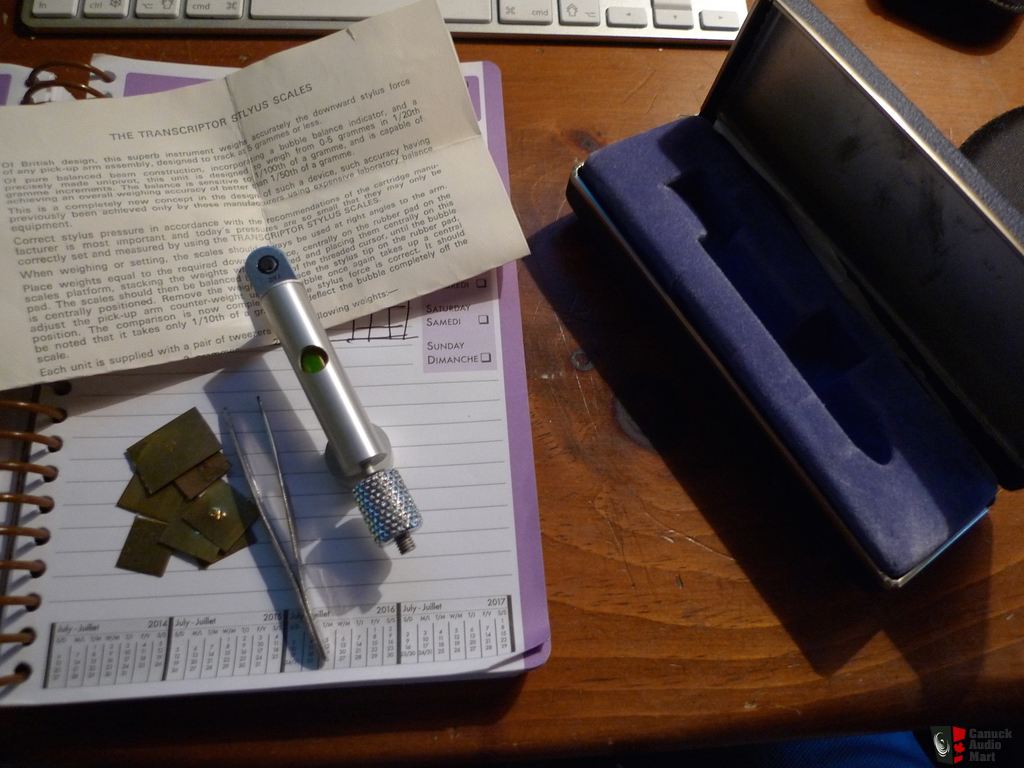 I still use this, that I got for free with Hi-fi Review magazine many years ago: 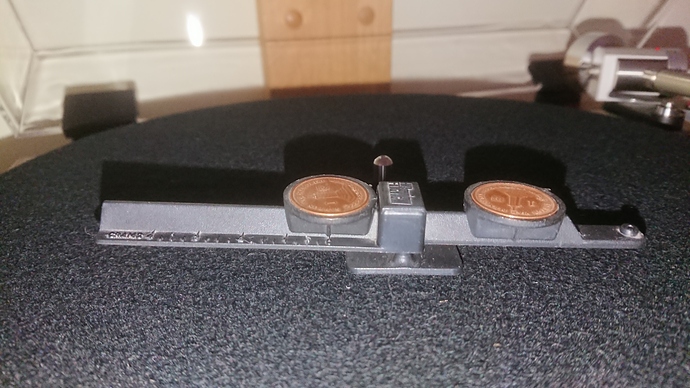 It’s good enough for initial setup, which I then refine by ear.

Ortofon balance for me !

Assuming it’s the same, just found mine while looking for a fuse:

Prompted by some remarks above I tried my digital scales originally bought for archery purposes (weights measured in grains). It also measures carats, grams and ounces. Mostly used for cooking now to measure small weights.

I put it besides the platter on a CD case which brought it close to the platter level and lowered it. It revealed the 1.75gm on the Rega RP10 dual was in fact 2.0gm. The Rega depends on balancing the counterweight at 0.0 on the dial and then dialling up a weight. The balancing can be difficult to judge.

There was I thinking I was on the light end of the recommended tracking weight!

Any preferences on actual tracking weight.