@Richard.Dane hope this is okay.

There is regular discussion on here about the sustainability of Naim CDPs and it now seems that the stockpile of laser mechanisms is depleting fast if not finished. Now this is not an anti-streaming rant - I have a Qb and Tidal account and it’s great - and I know one solution is an independent transport into a DAC or streamer but for many of us who have invested in considerable CD collections and CDPs and continue to collect music this way (for classical music it is just so straightforward) it just seems so wasteful that these fantastic music playing machines won’t be able to be sustained.

Given that Naim have found a way to resurrect the wonderful Aro in partnership with a 3rd party partner surely it must be feasible to engage with a provider who could engineer laser mechanisms to the required specification?

Anything is possible. But at a cost.

Nice idea if you want to continue playing CDs, but remember that Naim did a deal with Clearaudio to produce the Aro2. CD mechs are generally produced at scale by huge multinational businesses like Phillips, for whom Naim are tiny market. It seems pretty unlikely to me that such a company would be remotely interested in keeping up manufacure of obsolete hardware for which there is clearly a dwindling market.
Who knows, perhaps someone will see this as a niche opportunity, but it seems unlikely to me.

The cost is likely the prohibitive factor here. I’m just hoping my CD555 continues to perform its magic for a long time to come…

I wonder if there’s any scope to integrate another mechanism to the tray based players. Pick a current mech that performs well enough, the cost might be to a small manufacturer to create a physical and electrical caddy that is the existing form factor of the VAM mechs, but allows fitment of a smaller more modern mech. Actually as I type that it sounds rather optimistic X)

I’d consider doing that for my CD5 if it had a terminal mech failure. If the mod also gave digital out too…

That approach kinda works for Linn after all, I can imagine the Naim equivalent conversation about CD casings that we currently reserve for fluted plinths

There are still Naim units which can play or rip CD’s, surely…?

The Unity Star & Unity Core seem to - as does the CD5si. So Naim still have CD mech’s being bought in, for production of these units.

It will all come down to costs. I doubt there is enough demand, from repair/service of Naim legacy CD players, to justify the amount of re-engineering involved…

The CD555 mech can still be replaced - I am quite sure that Naim has enough of these to keep these units alive for the next 2 decades.

There are. But also, there cannot be many Naim units that get chucked away when they break? I would hate to throw my CD5 away if the mech failed. It’s part of the Naim appeal, a big part for me, that their kit is serviceable.

I get not all their kit is serviceable, e.g. mk 1 Aro, but given how similar the CD trays look physically, and that they’ve had a range of mechs integrated over the years, I really do wonder how much work it would be to make a new tray that was a drop-in replacement. Even if it needed a player model specific plug/board to make it electrically compatible.

If Naim had a solution based around a new mech I would not think twice at £500. I’d probably pay more if I’m honest, if it kept the unit running into my old age. I don’t like change much

These are not the same mechs, the Uniti Star uses a cd drive from Teac. The CDsi uses another mech from Philips i believe, albeit a different one that in the CDS3, CDX2 and CD5XS.

It must be possible if it makes some kind if business sense.

Given the current situation, i think that many would be willing to pay above the regular repair price to get their CDX2 or CDS3 their mech replaced and to get the units going for further 10-15 years. These were expensive devices to begin with.

Putting things into perspective: A DR upgrade to a 555PS costs around 2500 pounds.

Naim is looking into the VAM1202 mech issue, but it is not a priority as other things are more important due to Covid and the whole disruped supply chain.

The management of obsolescence is a topic on its own. Others have already mentioned that finding new mechs is not an immediate priority for naim. The current supply chain is not a good place to be fishing in right now for an innovative solution to a relatively small fry issue. Even if you could find a supplier interested, the costs would be stupid.
Imagine the conversation.

Sometimes in this forum i get the sense that CD Players are old tech as tape decks are.

There are many, many high end cd players on the market. Many who were introduced in the last 3 years.
There is definitly a demand for them. If the demand is high enough i have no doubt that Naim may at some point reconsider to release a new high-end cd player.

Denafrips released a cd transport with a Philips CDM4 mech in 2020. They have been overwhelmed by the demand and all players sold out within a few weeks (they bought 3000 mech’s, no idea how many units they produced, probably half of it to make RMA possible). Since then the player has been produced a few times more, and is still sold out.

Of course it would be great if Naim can service their players. I hope that they will find a stock of mech’s when the logistical issues of the pandemic have been overcome.

Thats good to hear, however asking price never tempted me to 555 ownership.

There is definitly a demand for them

There definitely isn’t! That, combined with lack of availability of mechs, was the reason Naim stopped making them. Perhaps other brands, or other markets such as Japan in which Naim currently do not operate, are different.

While I appreciate people have significant investment in Naim CD players. Mechanisms do wear out and go obsolete. I now have had a ND5XS (updated to latest code last week) and am still buying CDs and ripping them to NAS/Asset. If the CD drive in my PC fails, I will spend a few quid on a replacement. I did have transport issues on a second hand CDI and a new CD5. I certainly see no need to go back to a dedicated CD player. I don’t stream either, but do buy the accasional Hi-Res download.

My understanding from Naim is that lasers can be repaired by butchering a new one and fitting the parts into the old one, mostly the focusing parts. However, if the mech itself gives up, then I believe it is game over.

Am I correct in remembering that although Naim used Philips mechs, they re-wrote the software that drives them, and therefore it is not a simple matter of just replacing the mech?

That is correct - there’s a software job to do, not just a case of a simple mech switch. Naim doesn’t do ‘off-the-shelf’ with anything.

IIRC, some of the older mechs and servo boards need specific setting up too, so not a case of just dropping in any old example.

Maybe the remote is? 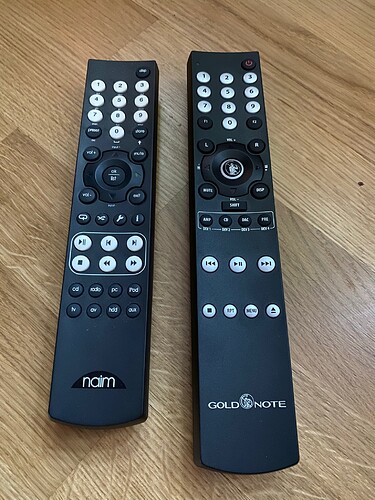