In my understanding, a huge room like that is quite like no room at all. But I am curious on what you think of that.

Those speaker stands are cool…

I’d pick music over a kitchen any day. Unfortunately my wife is actually looking at kitchens at the moment. I could get some seriously nice hifi instead of a new kitchen

I’ve just had a new Kitchen AND a new HiFi, both approved by my wife. In fact, my wife was the one who decided that I needed a Naim Fraim to put the new HiFi on!!

We have been married 35 years & February 14th next year will be the 40th anniversary of our 1st date. Two many miles on the clock to trade her in now…

When I dropped out of hifi some years ago I had a pair with original bases. I gave them away to the house movers on our last move 5 years ago. In my defence I paid very little for them and never really bonded, but then again they were being used with a fairly mid range av multi channel amp.

A barkeeper if it’s a kitchen with a bar.

I see, thank you. I think it’s quite likely that I’ll try to get in touch again by then. I hope you’ll like your new speakers!

I think we need to know what Mrs. QS says about you.

Well,
Since I do not live in a house with such spaces, I do not go into the problems and considerations of the budget, the acoustics that produce such a listening space.
From my experience alone, in a friend’s system, which is heard in a space of 10X9X3.8, it sounded terrible, and only after a very serious investment, in the acoustics, the situation changed for the better, and still not perfect…
On the other hand, there is the real estate consideration… he lives in a world of compromises, in relation to the music he produces from his system, I don’t…

love everything, from the ESU to the Robin day sofa, the LTR tables, the isoblue with CB system!!!
I want to live in your house!

With the caveat that I have very limited experience of other systems and speakers, I am extremely pleased with the LS50 Metas and the KC62. The system was moved to its new room last night (approx 5.5m x 6.5m x 2.4m) and I was curious how the small speakers would cope in the bigger room. It sounded immense! A real difference from how it sounded in the previous room (3.5m x 5.5m x 2.4m). It’s as if it’s able to breathe properly now. The sound was bigger, the soundstage wider and deeper. Just more of everything.

I avidly follow John Darko’s YouTube Chanel and podcasts as I find them very enlightening, especially when covering items like room acoustics and their impact on what we hear. I was really surprised listening to a recent podcast where he was discussing the Dynaudio Focus 30 with the chief engineer Stephen Entwistle. I believe JD’s listening room is approximately 6m x 6m which he regards as a small room. This view was reinforced by SE who agreed that a 6m x 6m room was small in terms of speaker required to fill it. I was sceptical of this until listening to my system last night as I thought I would have needed bigger speakers to fill the room.

The sound in the previous room was excellent and prior to that they were in a smaller room again sounding great. From my experience they sound fantastic in (what I would regard as) a small room as well as a large room.

NDX2 and SN3 in today. Sounding absolutely stunning out of the box.

Any excuse to show people… 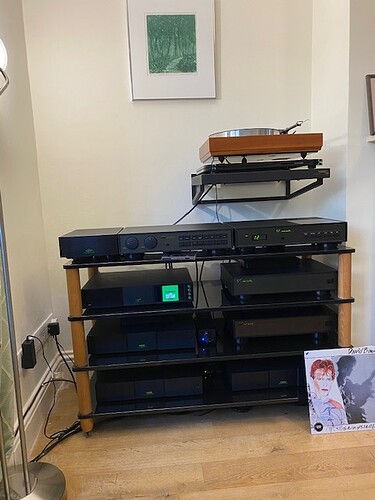 The excuse this time is that the 250 that has done a great job since about 1992 is OUT, along with the tape deck (good geek points but just never used).

I realised that (with 52 and sorted sources and appendices) I could consider a change of power amp. I expected to get a pair of 135s and get them serviced - thanks to all on the thread that helped there.

I didn’t get 135s. If you peer closely, that’s a 300DR. In my room and system, and contrary to what might be expected, it delivers exactly what all the comments here have suggested, but with considerably more foot-tapping, smile-inducing boogie than my 250 too.

Now I need to get back to listening.

Great album. That was my introduction to Bowie so I have a huge soft spot for it.

The metas keep surprising me, they were in honesty a bored covid buy, I’ve got two pairs of Guru Qm10s so only bought the Kefs on a hunch they could be giant killers in the mould of the Pioneer A400 (which always escaped me, other than a bust eBay buy that went back).

The Guru’s are absolute legends in their own right, so this wasn’t a replacement and to begin with the Kefs were underwhelming. They took ages to run in and couldn’t hold a candle to the Guru’s for enjoyment, technically, yeah, they were good, but did they move me, not a jot.

After lots of positioning changes I began to get the measure of them and since then they’ve gone from strength to strength. With the latest addition of a new Ania on the RP6 they’ve just sung.

As said previously the kc62 was another lesson in perseverance, but now, the two in tandem, run in and positioned as best as they can be in my room, spellbinding.

The more you provide to them the better they get, but they are not a throw it at them and they just deliver.

I suspect many owners might wonder what the fuss is, or be in systems that can’t reveal their strengths, which will probably make them a steal on the used market when they can be accommodated to deliver their best.