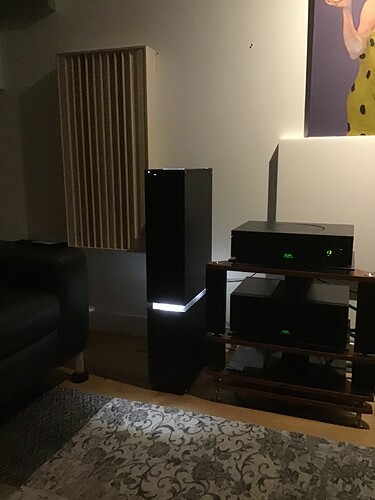 Hi Ditton,
As you can see it stand head and shoulders over the Classic range

Lots of good things have been said above from other owners about it, so maybe simplest way is to say: “ It does everything better than the 552 and some!”…and of course considering the price, so it should.

All the best Peter

Can’t figure out what Peter did wrong.

It was not just Peter. It was to do with the rule that forbids discussion of unauthorised modifications, which include 3rd party fake SNAICs and Burndy cables.

[Note: Heavily edited, refer to the floor plan further down. Would have been easier to follow if I had amended the picture instead of describing, but I only realized when done

I have an L that is 9x4 m in the large living room part, with the small part of the L being an open kitchen that is 4x3. Height is 3.3 everywhere in the center of the ceiling and 3.1 at the perimeter (imagine the ceiling including a smaller L in the same ratio, and recessed so that it is slightly higher).

The structural outside wall is along the outside of both legs of the L. On the long leg it has two very large windows / doors to terrace, i.e., to the left and the right of the center column where the system is. At the bottom of the picture, the short leg of the L has two more windows/doors, one in the living room part and one in the kitchen part (with yet another column between, not shown in picture).
Apart from the 2 outside walls, the rest is all plasterboard/drywall (more substantial at the kitchen wall to the neighbors of course, but could be a bit better. )

(Only the garage below me, a big factor when choosing the apartment. Above, the real, concrete, ceiling is even higher and the 3.3/3.1m room ceiling is actually lowered drywall suspended from this concrete ceiling, so in all well isolated to upper neighbor).

I found the ~perfect spot for this room but it is the only one that works:

[Right here at the top beyond the drywall is the bedroom. In the living room along this drywall there is a nearly wall-filling book shelf]

As you see, sitting position is such that my back is against the opening to the kitchen, i.e. facing the outside wall where the speakers are placed left and right of the big floor-deep window / terrace door. Giving me mostly 4m behind (apart from a bit of the inside drywall intruding, but it is not directly behind me, min distance is 1.5 m from right ear, anything closer is already the opening to the kitchen). Due to the large L part being narrow, distance from head to each speaker is 2.6, same as between speakers. Speaker baffle to the outside wall is 1m. 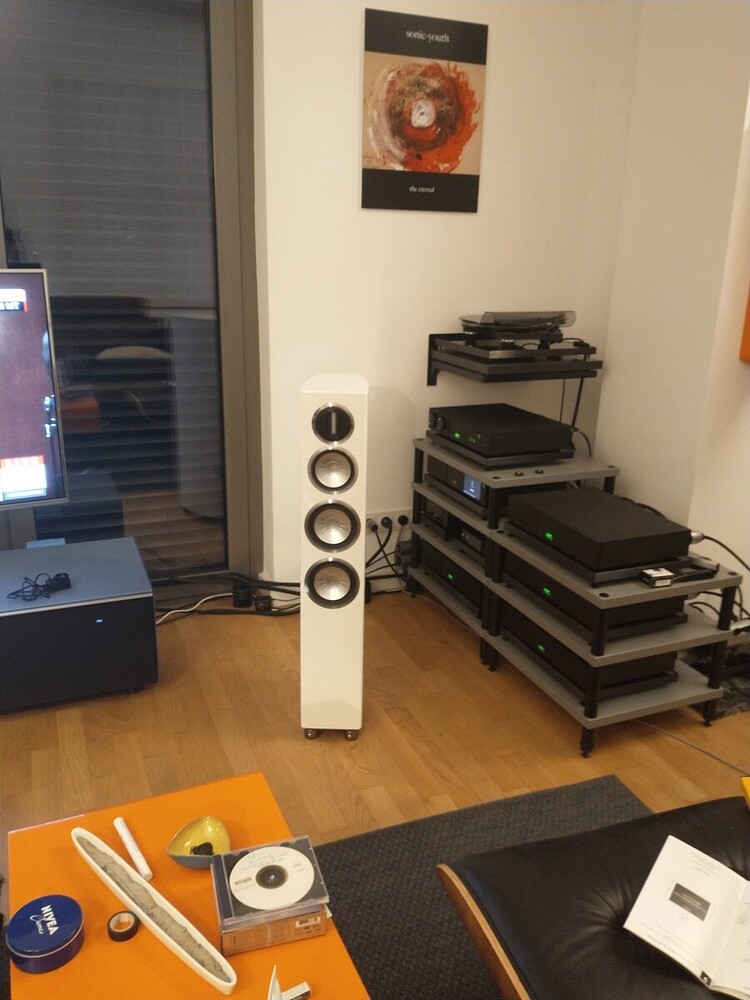 I found that this more complicated shape seems to even out modes compared to a simple box. There is ample space to all walls and also ceiling due its height and sitting relatively close to speakers, naturally creating largish runtime differences between direct and reflected sound. Note that despite the odd shape, if you take my head as the center it is actually pretty symmetrical around the head regarding wall2wall distances and such, but sufficiently different to not have the exact same modes in the 2 parts of the L. I suppose it also helps that the ceiling is not one uniform height.
(Bonus: Can open the windows/doors if I am careful with the volume, removing most modes)

There is a pronounced bass boom in the corners of the kitchen when volume is turned up, but it does not bother me. (I can imagine if there were other people regularly around in the kitchen, it might be a bit annoying. There will be such areas in any room, though)

Like Darkebear, I found speakers placed in front of structural outside wall essential. Placing speakers in front of any of the drywalls sucks all the bass and life out.

Apart from that, placing them at the bedroom drywall and playing into the long L part creates horrible reflections, in part simply because it’s only 4m wide. And if you keep them away from the side walls, the speaker base is way too narrow. Plus, there is a door to the hall to the right and the outside wall to the left is actually mostly the terrace window/ door.

To summarize, an L or other odd shapes can work great, I think that most might, but there may be only one arrangement that works and you may have to design the rest around it. In my case, the columns are lovely but the way they are positioned limits the available options further.

Thanks, I hope so and invested some more work into the posting

Very nice scope! And OMG controlled from the chair! I envy you.

You can spend as little or as much as you want. It’s a bit like Hifi with light including the arm chair!

You can spend as little or as much as you want. It’s a bit like Hifi with light including the arm chair!

I had a simple refractor as a child and cartographed sun spots manually every day. (I also was sometimes teased by classmates …). A couple of years ago I got back into the physics hobby, checked out the advances in amateur scopes and marveled at the state of art. I would even have the space outside and all, problem is just I live in the city and scattered light would ruin the fun. The cash is spent better elsewhere, but I still envy you

the city and scattered light would ruin the fun

If you go for Astrophotography you can filter out city light. There aren’t many dark sky places these days. My aim is to automate and get a good night’s sleep.

If you go for Astrophotography you can filter out city light. There aren’t many dark sky places these days. My aim is to automate and get a good night’s sleep.

But aren’t the pros complaining all the time about stray light? They can’t filter it?
Anyways, I think I am better off looking at other people’s photos

That’s quite similar to my room (proportions not quite the same) and the speakers are in similar location, but seating position further back

Thanks for the input. I was indeed considering to have it slightly further back, too, but the width of the path behind the couch is now still comfy. Any further back and it starts to become a bit crowded. Plus there is a carpet and the couch is heavy, so changes require another person. Might look into it later, but good to know about you - you are exploring everything so diligently

(I love the apartment but I wish the large part was 0.5m wider and the idiot builders would have made the terrace doors open to the outside! It would be absolutely perfect then)

Might look into it later, but good to know about you - you are exploring everything so diligently

You can’t hide, I am following you and I know

But aren’t the pros complaining all the time about stray light?

If you want to photo buildings at night against the celestial background then dark is good. I saw some wonderful photos of Comet Neowise against the such foregrounds.

The more I look at other people’s photos the more I want to give it a go. Besides that the family may be able to connect as well. It’s a great introduction to the mysteries of the universe for young minds.

I guess if you live in an apartment things might not be ideal. Live long…

For @PeterR’s benefit, the parallel between audio and optical are striking. You have reached the Hubble level. The universe keeps expanding as we see deeper and deeper.