I have now had a Uniti Star for about 3 weeks – a Naim-refurbished unit for £2500, which seemed like new when it arrived. My previous system was a Cyrus 8 amp, Cyrus CD6, Sonos Connect, Arcam irDAC and B&W CM8 S2 speakers, and I was mostly listening to some CDs plus Sonos/Deezer (non-hifi version). I have kept the B&W speakers, and I also have a Project RP6 turntable – although this does not get much use at present.

I have recently ripped about 800 CDs to flac using XLD on a Mac, and have these files both on a Synology D218 NAS and on small hard-drive attached to the back of the Star.

So I am now listening mostly to the Qobus service baked in to the Star, plus the tracks on the attached hard-drive. The internet radio function is proving massively popular too, especially Groove Salad with my wife and various reggae dub stations with me.

Impressions
• Massively better sound stage, all round detail, controlled bass etc etc. In short, it is like another world. Wow.
• The SQ from the hard-drive seems marginally better than from the Synology NAS (the latter being connected to the Star via a Netgear Orbi mesh system, with one of the Orbi satellites connected by ethernet to the Star).
• Qobus integration into the Star is great, and although I am only on the trial version, I will almost certainly carry on with the subscription. Shame it has limited discovery functionality though.
• Deezer works okay-ish through Chromecast, although occasionally struggles with buffering, and often takes nearly a minute to make the connection and get going properly. But I really like Deezer’s Flow feature for discovery of new music, and it has more of the artists that I listen to the most (post-punk indie, electronica, dub reggae, ambient/experimental). My teenage son and wife also really like Deezer, and have their own profiles set up, so I will carry on with that as well.

Possible tweaks
• At present I am using a “normal” USB (A to mini B) cable to connect the hard-drive to the Star, so I probably should change this. If so, what would be a reasonable level to aim at? I am thinking of maybe an Audioquest Forest at c. £55.
• I am currently using c. 10 year old QED Silver Anniversary XT speaker cables. Again, would an upgrade be worth the expenditure? Thinking here of Witch Hat N2, or something similar.
• The Star at present is plugged directly into a switched wall socket, using the supplied Powerline Lite. Not sure if it would be worth changing this to a full-fat Powerline mains cable.

I appreciate that this system is nothing like the amazing arrays that some of those on here have put together, and maybe in the future I might go down the separates path as well. But for now, I am incredibly pleased with the Star, indeed I am blown away by the improvement in both the SQ and the ease of use that it provides. Amazing product.

I don’t like silver anniversary, albeit limited exposure I find it adds a shrillness that can be removed with alternatives. Naca5 is the obvious candidate and so I’d check if your dealer can lend you some. 3.5m ideal, 5m better.
Switched wall sockets are easy to swap to unswitched, I’d do that first, look at mk, Crabtree or Hager.
Personally I would not change the usb cable that you already have.

Thanks. Why would 5m be better than 3.5m cables? I only need about 2m to reach the speakers.

Naim amps have particular requirements of the speaker cables connected to them. Have a read of this:

Naim power amplifiers do not have extra inductance networks in the output. Naim prefer the more elegant solution of allowing the speaker cable to provide the correct inductance and capacitance. To do so, a minimum of 3.5 metres per channel of NACA4 or NACA5 cable is required – although the optimum length is around 5-10 metres with a maximum recommended length of 20 metres. We find the supplied Naim speaker plugs to be an optimal match for the 4mm sockets we use on our amplifiers. In addition, …

I thought this didn’t apply to the uniti range? (Or even any recent amp?)

That’s what I thought too, although if pushed for details, Naim will not be drawn into an explanation of what’s really going on. (I guess there’s no reason why they should, given that they produce their own speaker cables, assist other manufacturers in selling you theirs.) However, I changed the speaker cables on my own Atom from some non-Naim stuff to NACA5, and quite unexpectedly it bought about a huge improvement. Also, there have been a couple of posts here from people having problems with their Atom, and in both cases, it turned out that they were using cables that were a very different spec from NACA5, and switching to that resolved their issues.

I use the normal Naim speaker plug connectors with my Star.

Naim supply plugs with all of their amps. The Atom has different ones as the sockets are closer together, like the Unitiqute before it. All the others are the same.

Thanks, that’s really good to know.

Im sure it says that in the manual, Ive definatley read it somewhere that it doest apply to the Star.

My Chord Epic Supertwin are 2m each with my Star, cables terminated with Chord Ohmic plugs. 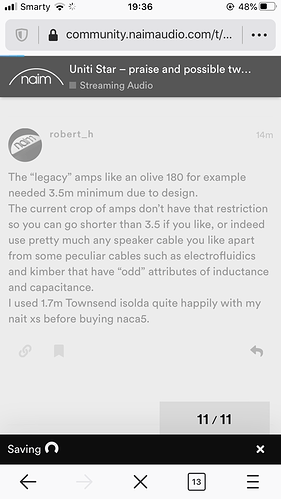 Naim’s own SuperLumina has a very different spec from NAC A5. For example, much lower inductance than NAC A5, i.e. you’d need about 5m to get the same inductance as 3.5m of A5 and yet it is sold terminated in 2m lenghts.

I’m sure they wouldn’t sell cable that damages or is otherwise problematic for their current generation of amplifiers.

Quick update. I have obtained a new 3.5m set of Witch Hat N2 cables with Naim plugs. Only had a quick 15 minute listen today (damned work keeps getting in the way) but my immediate impression is that they give a very noticeable lift in SQ. Looking forward to more music pleasure this evening.

Could you describe what improvements you had?

More detailed sound stage, more controlled bass, and what I can only describe as a more fluid presentation of the music. Highly recommended.

I’ve the full Powerline on my Nova and found it a very affordable and easy upgrade. More grip and control with a lower noise floor.