In a now-closed thread from last year, we discussed the issue of Naim’s indexing not being able to deal with characters not in the English alphabet (e. g. ‘.’ or ‘#’ or foreign characters). One person posted that this issue was to be resolved in a firmware upgrade. Did that happen? As I mentioned at the time, I have thousands of tracks in my classical library that would be affected.

Since latest firmware update to my NDX2 some of my usb memory stick music files do not play from USB. There was not any problem before update. The same USB memory sticks play perfectly in my muso. All recorded in Flac format. Stick is formatted in NTSC. Does anyone have any ideas? Has update changed the format required say Fat32 for example but most of the files will play? Had problem when first purchased NDX2 and was told to use NTSC format.

Scroll down for my posts. As noted, I discussed the matter at the time with Naim support.

Good question. In the release notes below it doesn’t mention the fix. I just changed all mine with a script, so I wouldn’t know now. @Naim.Marketing can you advise please?

For users of Naim Uniti Atom, Uniti Atom Headphone Edition, Uniti Star, Uniti Nova, ND5 XS 2, NDX 2 and ND 555 We are pleased to offer Firmware 3.8, which offers a range of improvements and minor bug fixes. It also fully prepares these products for the upcoming change in TIDAL authentication – so is an essential upgrade for anyone streaming TIDAL. The update will be available from today, and is easily installed via the Naim App: please ensure you are running the latest version: 2.22 (Android d…

Good question. In the release notes below it doesn’t mention the fix. I just changed all mine with a script, so I wouldn’t know now. @clare.newsome can you advise please?

How did you apply the script? Maybe what I’m asking is the source of the scripting language. I assume I would use a script that searchers for ASCII values outside of the alphabet, but JRiver’s expression language doesn’t seem to have a function to do that.

A quick glance at mp3tag suggests I might have better luck there.

As mine was a one off, it was all very crude. Mine is also OSX based. I used the find command to get a list of all my files that had a & in, then pasted it into Excel column C, changed all & for “and”, then pasted the original list into column B, then placed the mv command in Column A. Then in column D I used the “concatenate” command to join all three columns, then just passed column D into a Terminal window

Of course I did a backup first

An act description of the issue would be most helpful.

JRiver has a bulk renaming feature, although I never tried creating a filter for files to be renamed. Also Need I only be concerned with the file name. What about the title of works, title of movements, etc.

See screenshot below. You would select what you want to replace in the replace section and assuming they are in sub folders click that in the filters section. Highlight the files you wish to change in the main window, use ctrl A for all - it will show you want it is going to change the name to, and then finally hit the ‘Rename’ button at the bottom. 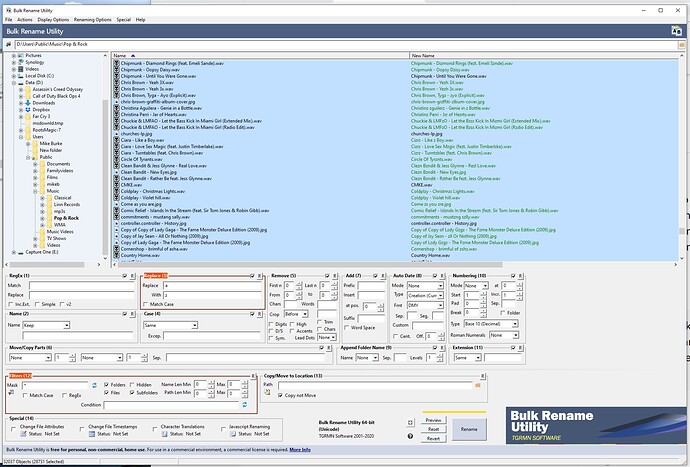 Sorry don’t know, but if you are changing one character, you may as well change the other if it exists.

Looks like JRiver does have its own file name search and replace. Now I need to determine the scope of the issue, as mentioned above. My initial understanding from Naim was that it went beyond the &.
@Naim.Marketing - do you know?

The following is part of an e-mail from Russell Hope (dated October 12, 2021) where I first heard about the problem:

“Just be aware that we have in recent days discovered a bug that will not play any songs or albums with special characters in the title (&%+ etc).”

Sorry, I don’t know. I tend to get rid of any special characters when I first put things in my library - Pet hate is when they put underlines instead of spaces in song titles.

Namemangler is what you want for the Mac. 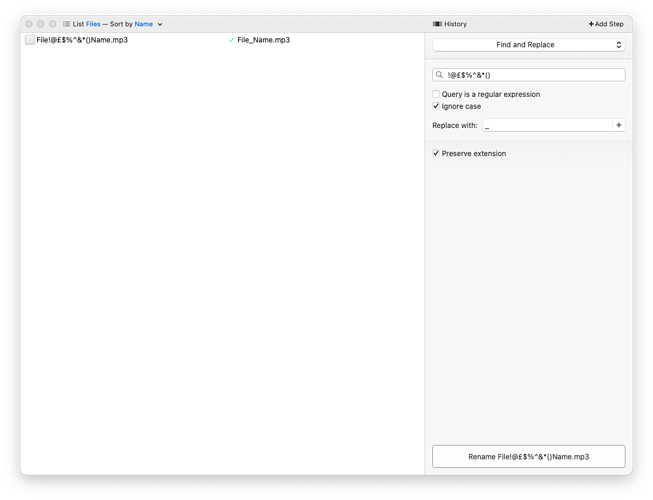 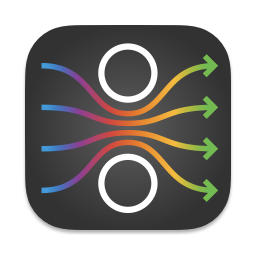 See screenshot below. You would select what you want to replace in the replace section and assuming they are in sub folders click that in the filters section. Highlight the files you wish to change in the main window, use ctrl A for all - it will show you want it is going to change the name to, and then finally hit the ‘Rename’ button at the bottom.

Namemangler is what you want for the Mac.

Both of these seem to be limited to changing file names (as is the JRiver feature). Russell Hope’s statement indicates, the problem is with/extends to song and album titles.

For the record, I use Windows.

You mean the metadata inside the file ?

Don’t have MusicBrainz, but I do have MP3Tag. Although I haven’t used it for any complex procedures.

But I need to find out the parameters of the bug (or if it’s been fixed silently) before I go any further.

Edit - it does look like JRiver has a find and replace feature for metadata. You can search on a field by field basis.

I don’t know, but @Stevesky may have insight

I too have MP3 tag but although you can filter there doesn’t appear to be a replace function. Music Brainz does have a replace forbidden symbols plugin. Need someone with a bit more knowledge on it to help further I’m afraid

Think there have been 2 updates to firmware since then and NDX2 is playing USB files with & and others in title.