What coffee are you drinking?

I’m looking at a Rocket Appartamento for my next machine. I’ve been a Gaggia Classic guy for donkeys years (15+ at a guess and still using my first one - at work!) but I fancied the E61 group head which I read good reports of. Plus, you’ve got to admit, it looks sexy 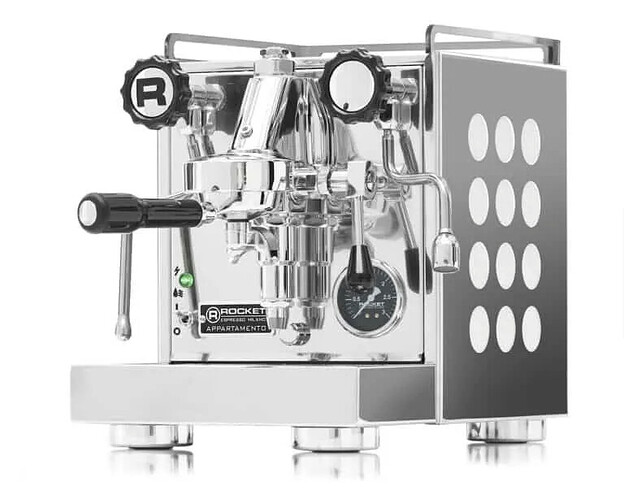 Being a Rapha fan I managed to get hold of the Rocket Rapha machine. It was well used and required a thorough service. That and a Mazzer Mini grinder have served me well for a few years now without any problem. One thing I read somewhere was that Volvic water has the ideal ph level. Having had two Gaggia machines destroyed by London tap water, I suspect there is a lot of benefit from using Volvic in a hard water area.

We’re in a very hard water area and I used to use ‘softened’ water thinking that was best however it still used to clog up (the 3 way valve). After replacing the valve, the next time it clogged up I found out how to strip the valve and clean it. However that was only good for a few months and then it happened again! Then I discovered it’s debris from the boiler and it’s because I never use the milk wand. If you use the milk wand then it flushes debris from the boiler; it’s only tiny flecks of hard water or some such but it’s enough to clog the valve. Now what I do is at least once a week fill an espresso cup with water blasted from the frother wand. Result is (well so far) it never seems to clog.

Rockets are very nice nice machines. There’s certainly something about an E61 group head.
I used a Gaggia Classic for many years too and then upgraded to an ECM Barista machine with E61. Just felt the ECM had a little more on build quality. 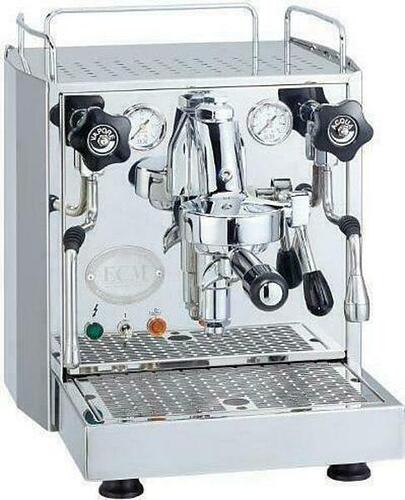 I have had the same Sage machine for a couple of months now and I agree it’s very good, easy to use and doesn’t create much mess!

I too have been experimenting with beans from various sources. I am told it is best to use beans between about 5 and 30 days after roasting so you need to know the roasting date. As discussed earlier in this thread, many beans sold in supermarkets are undated and likely to have been on the shelves for much longer than is optimal. I have found a good selection online at Balance Coffee, Union and 200 Degrees, (but am still to find a firm favourite).

The ECM does look better; the extra pressure gauge is a nice touch as well.

Yes - though my upper limit is around six weeks, and it depends how well you store them after purchase

I popped round to see a friend for coffee yesterday. One of the coffees he offered was one recently found at the back of a cupboard, a Waitrose Colombian ground coffee best by 2016. He said they’d tried it and it was surprisingly drinkable. After a sniff of the packet I went for that one out of curiosity. I was surprised how good the flavour was. It lacked some of the aromatics I’d have hoped for, but generally it was a pretty drinkable coffee. I suppose the vacuum sealed pack had saved it from complete deterioration, not a coffee I’d choose over a fresh one, but as I said totally enjoyable.

I tend to get lost with coffee and wine, years of nasal spray for perennial rhinitis means I have a limited sense of taste and smell, so those statements of “I’m getting rosemary and a hint of nutmeg…” tend to mean nothing.
I have a Gaggia Classic, mainly bought because the De Longhi that I had before, chosen purely on space consideration, failed twice one month out of warranty. I can appreciate beans better than ready ground and eventually settled on Tesco Peruvian. Then there were stock problems and this was on offer. For once, the description of chocolate was met. I have a new favourite. 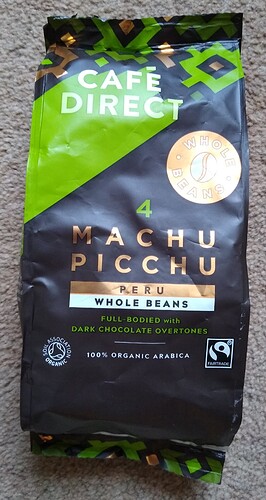 tbh I tend to glaze over when I read that sort of thing on the coffee. However I can tell good tasting from bad or mediocre tasting

I’m getting a little concerned though with drinking too much poor coffee in cafes/coffee emporiums: I worry that I might start to prefer crap tasting coffee

I’m sure that there are people who enjoy the whole tasting thing. To me it’s a bit like do you listen to the music or the equipment?
As I have gotten older I find that caffeine affects my sleep more, so I would rather have one good cup a day early on so it get processed before bed time. Good coffee shops seem few and far between, I don’t enjoy the chains.
Then, I drink decaff tea or corporation pop the rest of the day. 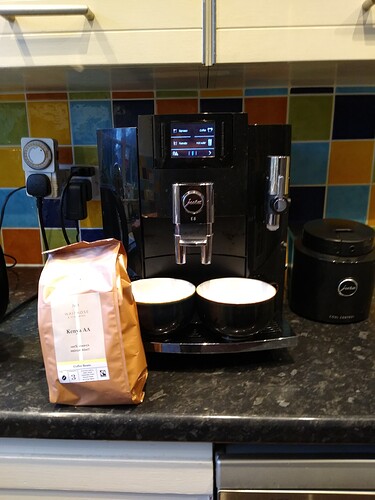 I never really got on with the americano, I love a good cup of filter coffee. And I think the many so called coffee shops that don’t do one of those or an aeropress shouldn’t be calling themselves coffee shops. Any cafe can buy a fancy machine. I used a V60 for years, but in the end got lazy and bought a Moccamaster. Can’t say the coffee is worse, and certainly more consistent.

For good coffee IMO a conical burr grinder is a must, as are good filters. The Melitta ones are good and not expensive (Haven’t found more expensive one to be better TBH). And don’t forget to bloom.

One tip, I’ve found this really helpful to dial down the coffee/water ratio and grind size whenever I’ve changed method/machines:

If I am out and fancy a cuppa 2 places I try to avoid are Starbucks and Black Sheep, the former because if I order an Americano they’ll inevitably cheat by serving me filter coffee which is not only incorrect but tastes vile as it’s usually been standing around a fair while. Black Sheep use Robusta beans which are so caffeine rich I start to shake if I have anything but a small cup.
BTW, a little tip on prolonging the life of one’s coffee and beans at home for those not already in the know is to pop them in the freezer.

I’m glad I’m not the only one that thinks Black Sheep is the worst coffee chain. Starbucks and Costa not far behind.

Unfortunately the reverse is just as common. It’s not even uncommon to explicitly ask and be assured they do have filter coffee only to be brought an americano.

which is not only incorrect but tastes vile as it’s usually been standing around a fair while.

The issue is often that many machines use a single heating element for both the hotplate and the water. Or some have an adjustable temp where someone who doesn’t know what they’re doing thinks hotter is probably better.

While the coffee should be brewed at 92-96 degrees, it should be served (or in this case kept) at only 80-85 degrees or the taste goes off. Of course even at an ideal temperature it shouldn’t stand around for ages, I’d say 45 minutes max. Ideally of course they should make it fresh, many independent shops have a V60 for that purpose.