Wish list for new naim products in 2022 and beyond

That doesn’t confer any benefit as I cannot see the screen from where I sit and, besides, I can access anything from my iPad or iPhone. I do wish there were a firmware switch enabling the user to turn off the screen permanently.

Well, bruss asked if there is a way to start playing music with a single button press. The presets are the way. I didn’t say that it’s beneficial for everyone.

As for always turning off the screen, or at least nearly always:

This should turn off the display most of the time except for the 5 minutes after an album finishes until it goes to standby, plus I guess except for the time it takes from walking up the streamer until pressing play

There are so many ways to set it up. I have Auto Standby Time set to Never, because I leave it permanently powered on. With this setting, the unit usually returns immediately to a blank screen once an album finishes.

I have used the Standby button on the remote on the (usually) rare occasions when the wretched home screen appears and won’t disappear.

It would be so good if there were another option, besides the Display Off During Playback option, to turn it off permanently. I cannot see why this isn’t made available. I think Will is aware of my preference in this respect.

I have Auto Standby Time set to Never, because I leave it permanently powered on.

It would be so good if there were another option, besides the Display Off During Playback option, to turn it off permanently.

Yes it could be more straightforward, but I don’t think you can get closer than the combination of settings that I gave you. It’s up to you

I’ll try that. Thanks.

I got this recommendation from Steve Harris by the way, because I was looking for a similar thing. He explained the states in this post and further clarified a few posts down:

Hi @tuexoqu By default Naim Streamers comply to the latest ErP power regulations, so take less than 2 watts from the mains and stay connected to the network. To achieve this we switch in a high efficiency switching power supply that can keep select parts of the digital electronics powered. When the product needs to play we sequence a Hifi grade linear PSU in, sequence all the circuits up and turn this standby PSU off. We do this with relays and quite a bit of software. If you prefer t…

Melco do this with dedicated isolated Ethernet output for streamer. They also do a dedicated router switch’s S10 and S100( bit pricy though). Being part of Buffalo the Japanese IT giant also helps!

272 replacement or nothing for me !

Surprise Surprise, keep the money in the bank

I like the Naim App, but I wish it would always show the type of file and the bitrate of the music that is currently playing so I know I’ve set it up properly.
I’m not sure this is considered a new product so I’ll add that I’d also like to see a streamer-on!y product like almost all the others make.

It shows file type and bit rate for upnp and Qobuz. Maybe you are looking in the wrong place.

Yes possibly, thanks. I’ll have a good look and jot down some notes on where exactly I’m not seeing them, then maybe start a thread for some assistance. We don’t get Qobuz in Canada so it’s more for Tidal, iRadio and local streaming.

They are certainly there for upnp, iRadio and Qobuz, on what I call the ‘now playing’ screen.

Then it has to be something I’ve got wrong, or I’m not looking in the right place.
And here I am again at 3:30 in the morning, typing instead of sleeping. But I’d much rather be figuring out these issues than just sitting here. It’s not often, but sometimes sleep just doesn’t happen. Ah well, some people have real problems.

Here it is, on the now playing screen of the app.

It also shows temporarily on the screen of the new platform 272.2. 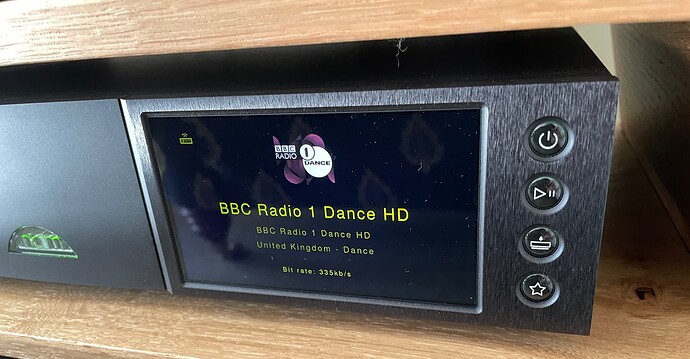 It also shows temporarily on the screen of the new platform 272.2.

I see what you just did there……

Thanks so much, HH, that’s very clear. I’ll have to have a closer look and itemize exactly where I was having difficulty seeing the info. I can’t quite remember just now, it may have only been one area. From what you say though, it seems like the info is certainly there.

You have to play around with the app settings sometimes. Sometimes you can change something accidentally and then it’s a bugger to get it back to where it was before.

Or maybe that’s just me ?

It would be nice seeing the info before choosing an album (if it’s available in various versions), but I don’t think it does that, you have to play it and then go to the Now Playing screen as HH wrote