Wish list for new naim products in 2022 and beyond

but it ain’t happening unless they make a radical change to power supplies or find a genius way of internal screening, which seems unlikely.

Im not so quick to dismiss this. Aren’t there energy efficiency regulations (EU?) that at least apply some pressure for manufacturers to adopt more efficient designs?

I’d be very interested in a 500-level or above integrated or 2-box (Statement Lite) type system from Naim. There’s no fundamental reason why they cannot deliver on this. They might not want to, but technically it has to be feasible.

Agree with that. Other than the price, the additional boxes are off-putting in terms of upgrades. I get the engineering rationale, but can’t believe it’s insurmountable given the quality of Naim’s engineers. Obviously it’s an attractive business model to increase the number of boxes needed as you go up the upgrade path but a higher level Super supernait would tempt me, no question.

Yes, it would not be a problem for Naim to add a DAB+ module to a NAT as there is already a DAB/FM optional module available on some of the Uniti models.

As also suggested earlier by David, I wish first a Core 2, and/or a substantial update of its firmware.
I would like to have access to the original album booklets, drop Rovi, and be able to edit metadata.
What about a 552 simplification and upgrade? Somebody posted a few years ago that the emerit 552 had long passed its bedtime.
Finally, will Salisbury ever consider implementing DSP with the next generation of players? Too early? Too complex, or still high end incompatible?

Finally, will Salisbury ever consider implementing DSP with the next generation of players? Too early? Too complex, or still high end incompatible?

I also hope they’re thinking about it. Integrated into a future generation of preamps, I think it would be an interesting move. Maybe the calculation is that it isn’t their core business, and would require additional in-house expertise, and much like tonearms, and speakers, they are better off concentrating on their traditional strengths? Be interesting to see what the next 5 years brings, DSP integration seems to be a neat way of making more systems suit more rooms.

Jason Gould of Naim said to me that room correction with DSP type technology goes against the Naim philosophy of keeping the music signal pure. Their view was change the room to create a better sound, not tampering with the signal they have been trying to keep as pure as possible. But you never know they may have a change of heart.

Yes, that what was a few people heard……precovid. Things change, and Naim are changing………

With the recent departure of my Denafrips Venus II DAC, I would like to see a NDAC2.

Not really a wish but a thought … the Uniti models like Atom and Nova are here for how many years?

NAC-N372 with updated internals, a balance control and a powered Aux 2 input port. Lose the RCA inputs and add a couple more analog DIN inputs, and it’s mine!

The Naim Uniti range is rarely (if ever) beaten in head-to-head tests; we’re still winning Awards for all products in the line-up, which means we’re in no rush to launch replacements! Any upgrades will be via software updates - so you can buy rest assured your Uniti will have years’ life in it yet. Don’t be fooled by the Atom’s seemingly modest wattage - it punches well above its weight in every respect, which is why it keeps winning awards year after year! Have a listen with your speakers - w…

Caution, long comment…
I’d renaim the question. Who wants to go active?
And, is active still an upgrade path worthwhile these days?

Aside from necessary space, funds, dedication, patience and a tolerant partner, a few other crucial issues need consideration. Probably the most important question is with which speakers.

I personally decided to go active about five years ago because I eventually wanted to get my DBLs which I had in passive mode since 2007 play at their full potential. I have not been disappointed. But, would I have gone active without the DBLs in the first place? Probably not. DBLs are speakers that were actually made for active operation, with passive mode rather a temporary compromise. DBLs have always been in praise for their sonic abilities, but at the same time have been ridiculed for their wardrobe like appearance, huge space occupation, their low waf close to zero and their cumbersome assamblence necessitating a meticulous sealing procedure. They apparently didn’t sell in really big numbers despite all praise and meanwhile have become a legacy where it’s almost impossible to source a decent pair in reasonable good shape. Not only that but there is no further technical support for them from naim in case something fails. Although my refurbishing effort described in another thread has been well received and really brought mine and hopefully others back to unheard glory, the Achilles heel in case their drivers, particularly their mids fail remain an open issue.

So which other speakers. Obviously there are the big 800 Ovators. They have been made in even smaller numbers than DBLs and similarly have been discontinued long time ago. The Ovators in general have never been a well embraced and cherished product not to say rather been considered an utter disappointment. Although some may claim here the merits and even superiority of the 800 over DBLs, I have also heard quite the opposite from multiple sources I have no real reasons to distrust. But to be fair I have not listened to them myself. Still almost all aforementioned limitations apply to them as well, aside from the rather minor disadvantage that they need to be positioned well off the wall.

Remains the Kudos 808s. A very capable speaker indeed. I know them very well from a fantastic 500DR/552DR passive soon to be S1pre all chord system with a breathtaking record deck. They have and deliver it all. Room, detail, attack, microdynamics, involvement. But a true successor to DBLs? Maybe but probably Not. Someone here even went as far as to claim they should not even be mentioned within the same sentence with DBLs, being more comparable to bricks. All I can say I don’t know bricks. The question is do the 808 similarly benefit from active mode as do DBLs. I don’t think so. From what I know they were built primarily for passive operation, with active as a bonus. Only after some continuous arm twisting by a well known dealer naim eventually consented coming up with a crossover suited for 808s as well. I had the 808 on trial in my own active setting and did not really feel that they were a match for my speakers at least not at that time. But more importantly I don’t really think thy benefitted substantially enough being driven actively to warrant all the effort. Knowing their abilities in my friends passive setting I feel funds probably are better spent in cables and amplification to get the best from them. Some may object though. Nevertheless, as fantastic speakers they are, they are not quite up to the grandeur, sheer skale, effortlessness and colorful musical imaging DBLs can bring to life.

That brings me to a second point. As naim more or less discontinued building active crossovers - ok they may still be produced upon special order within the uk - I am afraid main stream active systems are finally a dying species. There may still be some nuts as myself around who do not shy away from all the effort, frustrations costs and troubleshooting to run such a beast, yet the glorious days for such big active rigs seem over.

So unless there is a real dedication from naim to see big active systems actually as an opportunity not only for short term selling kit but also as a long term investment in their biggest asset they -still- have, naimly their decade long faithful customers offering them a palatable upgrade path into statement territory for example by coming up with a new statement level active cross over or even more importantly with true DBLs successors worth called as such,-doesn’t Focal actually manufacture speakers?- nobody wants such many boxes … I should ad … any more. Chances that happening I am afraid are next to nothing. But maybe naim just doesn’t want statement level rigs around without actually buying a full passive statement system except “just” an S1 pre. I am probably not the only one not being able and unwilling to afford a full passive statement upgrade in a single step, …being tempted to ad because it’s probably not any better. 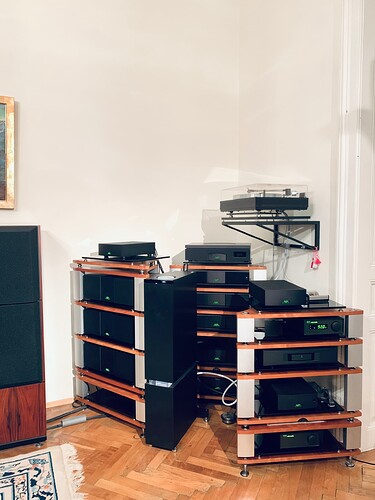 My needs are met.

Thanks Naim, keep at it.

Hi Charlie,
Always great to hear such passion. I have no doubts about your system as sounding fabulous.
But I read many times that an active system is very fragile. A minor grip and the overall sound can collapse. Then you have the enormous number of boxes, the probably humming ps…. Its definitely not to everyone.
As you can see in many threads, people are more and more keen to reduce boxes count.
Personally I would like to do that myself too , and don’t think anymore of what to upgrade after. My goal is to have the best integrated amp possible and it will probably be Aries Cerat in the future.
An Nd555 with 2 ps, a phono, my existing turntable, and Voilà! 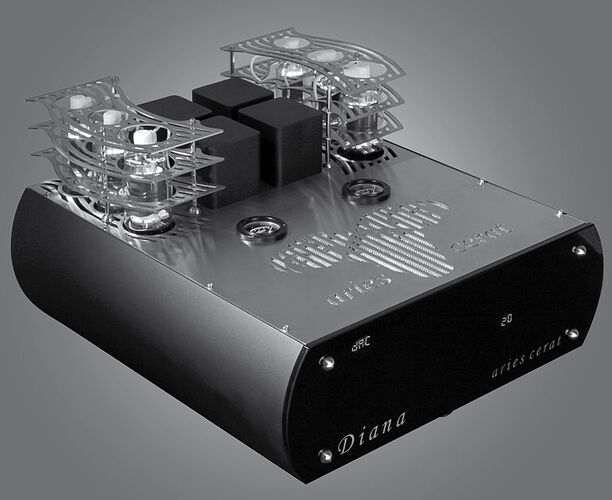 Seems a bit cheap at £250? Can you get one made in your own name sweetie?

. You got me.
If you prefer, it weights 250 pounds. The picture doesn’t do justice of the beast.
Price is around 20 k euros. It’s a tube integrated, but the transformers and ps are gigantic. So it’s very dynamic, organic, and with the magnificent tubes richness.

Thanks for the passion …

A range or proper shoebox sperates to replace the culled DAC v1/NAC152/NAP100 etc. It’s never happen though. Naim aren’t moving in that direction.

Not sure what else to wish for. The current price hike, while unavoidable, means that my Naim journey probably stops where I am now.

I’ve always wondered what a NAIT XS3 price point Naim tube amp would be like… in my dreams of course.