I assumed this was the update for the Uniti range (screen freeze), but the only update has been for the MuSo’s.
Any further news?

I think you have been really fortunate to find one standby/on cycle clearing the blank screen. I have found that it is rare for the blanks to be cleared by a single turning back to stand by and on again for the blank screen to be cleared, it would usually take a few on and offs during the day for it to function normally, if iti didn’t clear after a few hours I would reboot. I once as an experiment turned the Star on and off several times during the day for a few days to see if the blank screen would clear without a reboot, it didn’t and I gave up and rebooted on the third or forth day.

As for the phantom mute, I have experienced this a couple of times and had thought I had accidently put it in mute myself. Will be watching out for this.

I have just sent off an email to my very supportive and appologetic dealer with an 3 page attachment of all the issues over the lockdown period and asked them to forward it to naim as I find doing this get a better reponse than going through the normal support channels.

I don’t have any further news (I haven’t had any reason to be in contact with Naim) but I am sure the update will be soon. They are probably getting the Muso upgrades sorted out first.

Interesting. I’ve had the blank screen a few times (far less than the freeze), but all those times a simply standby and powering back on cured it. Either I’ve been extremely lucky, it’s a different problem with the same symptom, or you’ve been unlucky to have it frozen on the blank screen.

Seems like I have been unlucky 3 times as this is my third Star, the previous two displayed similar but not identical problems. Whilst the previous issues appear to have been hardware related, I think this is more likely software, well that is what I am hoping and that the imminent update will bring a welcome solution to this.

I hear from Naim that the firmware update should be released in the next 6 weeks or so. It’s still not quite there with all the things ready to be released.

6 weeks? Wow, someone is having a laugh. It’s already been 16 since the last one which was supposed to address this, which if I’m not mistaken wasn’t the first one either. Assuming it’s not delayed that will make it 5 months. You’d think they could release a bug fix affecting many users of a premium product a bit sooner than that.

Let me guess, we’ll be jumping straight from 3.4.0 to 3.5.0 with a ton of new features. I think many would be happy to have a minor update to 3.4.1 and get a functioning product first, and then wait for ‘all the things ready to be released’ in 3.5.0 a bit longer.

It’s disappointing, but certainly no laughing matter for anyone concerned.

As for small releases, I understand it’s not quite so straightforward as that, unfortunately. It’s probably why it makes more sense to go for bigger releases.

And if something suddenly crops up during Beta testing, just as you think you’re home and dry, well then it would be crazy to release without investigating further and trying to fix any issue.

I’m sure there’s always a trade-off, but the consequence of this approach is that if it’s not fixed, we’ll have the same issue for another 4-6 months. Googling I can find references to this issue going back to at least 2018.

And let’s face it, the current approach hasn’t resulted in a bug-free product either. Software has bugs, there will likely never be a single firmware without any. People accept that, and will be understanding of a difficult to fix issue that takes a few iterations, but only 4-5 over a two year period does not give the impression that Naim really cares.

I like the hardware enough to live with it, but I really sympathise with the people who just return their unit and look elsewhere.

Yes, both on Muso2 and ND5XS2, not often, about 3 times a month maybe

My Star is still plagued with the frozen screen… bit embarrassing when you have visitors admiring your £3k bit of tech and you have to do a reboot! Not a good selling point!

This is part of the reason I have gone backwards on 2 occasions now (backwards in terms of technology not necessarily sound quality).

The though of all my eggs in one basket was too much. I decided that having individual components that can be easily fixed (Naim) or replaced (Mini) for a fairly modest price which sound great (don’t look too bad either) was the way to go.

We all make our own choices.

My Nova froze today whilst using Spotify connect and required a 3 sec power button press to sort it out. Hasn’t happened in a while but I’ve sent details to Naim as I know every case might sort the problem in the next update.

New permutation on the screen freeze, currently showing Radio 6, while I’m listening to a ripped album. Naim support ignoring my request for an update on the promised “fix”!

Hi everoyne, it seems like the new firmware is fixing it!

Really? Not so here. It’s still happening about every two weeks. I just switch off the power supplies and switch them on again. I’ve got used to it now.

Have you updated yesterday’s firmware release?

Firmware 3.5 release – out now Today sees the release of new firmware for Uniti Atom, Star and Nova; plus ND 5 XS2, NDX 2 and ND 555. This delivers additional presets functionality, designed to make it easier to find and manage your most-listened to playlists, albums and radio stations, and adds some other usability improvements across the range. Updated Preset options · Following on from the recent App update with new Favourites functionality, Firmware 3.5 adds new Preset options – both via … 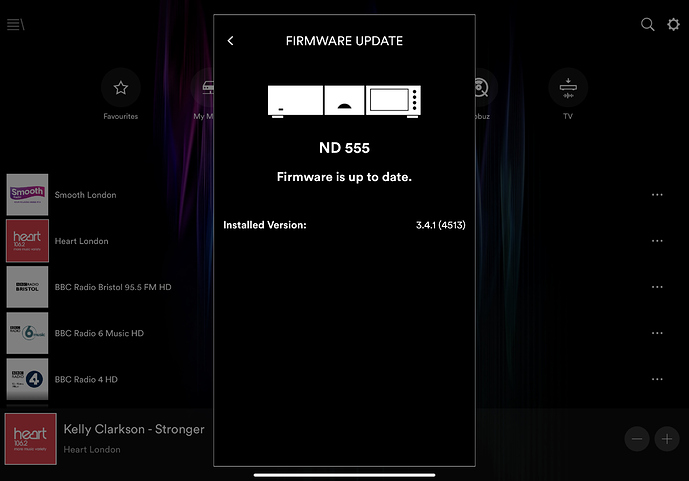 Richard, screen shot of my ND555 showing no update available?

Might be worth powering down and power up to reboot it, see if it thenfinds the update?