English humour again FR. To only challenge one of HH’s descriptions is to acknowledge that the others cannot be disputed!

i tried some humor too, perhaps not english

Selfies can be so disappointing…

There’s a cut away on their website which shows that the isobaric arrangement is in fact back to back, which is different.

"During previous open days, listeners have remarked on how the systems in the smaller, more domestically dimensioned, rooms seem rather more impressive. More intimate, was one description.

Of course these sound a lot more like the normal, familiar, domestic spaces they are attempting to emulate. It’s easier to bond with and be impressed by the weightier tonal balance too. A large volume of air with listeners far closer to the centre of the room asks quite a lot more of the system, although it also allows for an ‘airy’ bass and huge, borderline epic sense of scale that I personally really like.

Over the past year or so, we’ve started to see the Kudos 808s as being more suited to our ‘normal domestic’ spaces than the large one. This is no bad thing, since this is where most will go. On top of that, partnered with the moderately (!) expensive Naim Statement pre-power amplifier, these twenty odd grand speakers suddenly seem comparitively low rent.

This has led to a procession of larger and ever more expensive offerings from Focal, PMC and Dynaudio.

It has been an interesting ride, and the room turns out to be not without opinions of its own. The large Focals were judged (by us at least) not to sit well in the acoustic. Our existing customer base seemed somewhat predisposed against them too, so we decided to hold off on any upstream swimming.

PMC Fenestrias certainly do great things in there, albeit with a very different kind of bass to that with which many Naim owners are familiar. Adding some corner bass traps and other damping of a more general nature and, bizarrely, moving them closer to the wall, certainly moved things along and our PMC ‘fact finding’ event definately impressed a lot of ears.

*The new Dynaudio Confidences were next to join the signals portfolio. These are some of the best balanced passive speakers around. Both the top and bottom of the range, 20 and 60, work really well in our various spaces. Their bass behaviour and overall integration is probably technically the best of the speakers that we sell and many hear it this way too. But nothing is for everyone and it was interesting to hear customers responses towards the various systems. There is a lot of emotion involved *

Through all of this, returning to more mundane matters, we left the corner bass traps in place. Roland, Dynaudio’s guru was happy to go along with how the various rooms sounded. In fact he was quite complimentary. Talking to Derek at Kudos elicited an interesting comment, though. ‘I hope we can take out these bass trap things’. ‘They’re not always better, you know’. 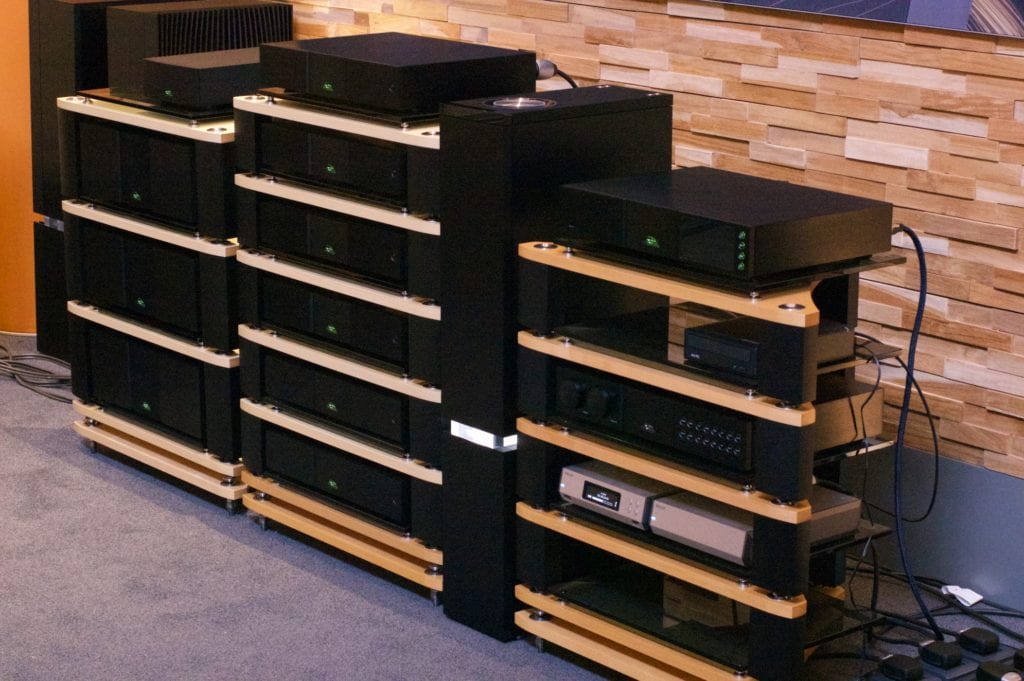 So . . . Kudos 808s went back in the big space, for now at least it’s Statement pre-amp running into 3 x NAP 500 DRs via Supercap powered SNAXO with an ND555 with twin supplies.

And no bass traps.

We started from scratch with respect to positioning and the sound we’re getting is significantly ahead of what we recall from the 808s running passively, even on the Statement power amps. The NAP500 power amps do sound a little more dynamically restricted than the Statements but the active arrangement brings phenomenal speed and resolution in compensation. Scale in all dimensions is colossal and all three rows of seating have a good, albeit different, view of the performance. The speaker / room relationship seems to be very happy.

Now that we’re content with the balance, we’ve tried reintroducing the Hofa Bass traps, just two, not the stacked arrangement of four for now and, overall, it sounds just that bit cleaner to our ears. Certainly not a vast change. Suspect Derek will want them gone, if only to reassure potential buyers that the Kudos speakers don’t need help, but we’ll soldier on for now.

Almost 26 years of notionally running Signals, and I know more than ever not to assume that we actually know anything. Work back to first principles every time and allow for the fact that there are many ‘right’ answers. 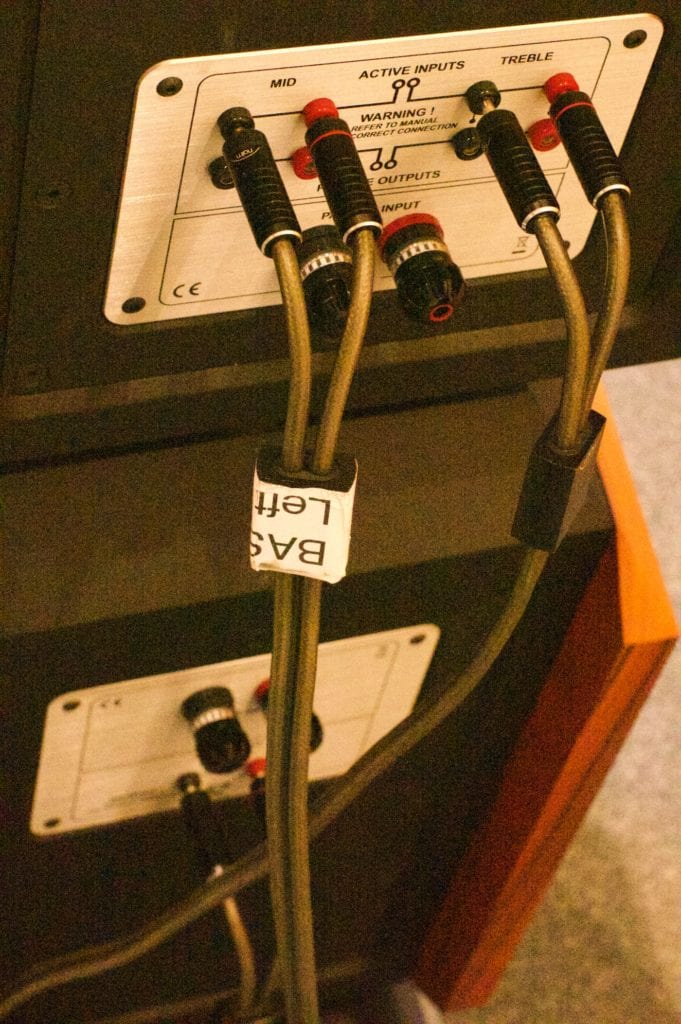 Having kept the 808s out of this room for the thick end of a year, it’s interesting and curiously refreshing to put them back. In active mode they bring something genuinely compelling. Their capacity to resolve subtle inflections and to dramatically stop and start without overhang is relevent to all musical genres. It’s part of things sounding real. On some music it is mesmerising, Nitin Sawhney’s Beyond Skin, for example, has these ‘cliff edge’ bass lines that only an active system can convey. If you’ve never heared it, you really ought!"

FR, I’ve edited your post to add attribution and show that it’s copied from elsewhere - otherwise it reads like it’s your words opinion rather than a copy a paste from Signals’ blog.

Its probably worth mentioning to those interested in hearing the Kudos / Naim active systems that this is a roadshow. The dates of future shows are posted on the Kudos website, and they may be one close to you in the coming months. Well worth it imo.

yep - Acoustica in Chester on 14 September with super 20s, 505, 606 and 707, in the shop passive and active. Lots of swapping around then! Shall be going hopefully…

What I’d be interested in is the contribution of the s1 in comparison to a 552dr within this active 500dr 808 setting.

@Darkebear went from 552 to S1 in active 3x 500 dr , but in Ovator S800. He could respond you. He was also at this Signals Event.
I don’t think Signals showed the difference between S1 and 552 in an active system in this event.

Don’t have the comparison of 552 vs S1 Pre if you own 3x NAP500, unless you have the money for the S1 Pre as you will otherwise really upset yourself.

The S1 Pre - in the context of that system - is IMO almost essential to allow it to reveal its full potential.
I made that decision after a home demo and the S1Pre blows-away the 552 in context of Active NAP500 system - it is not even close and to describe all the differences will just upset 552 owners - so I won’t.

I owned a 552 for many years and I was flabbergasted how much better the S1Pre was and it was worth the financial pain for me to get it into my system and begin to enjoy what it brought.

My system sounded happy and balanced with it performing its duties and it had to stay - and so it did!

I own active 500drs with dbls and 552sr and it’s hard to imagine that there is still room left for a further massive improvement. But then thats what one always thinks until experiencing otherwise. Anyway, thank you for your tempting assessment, maybe i should not try out an S1 in my system then unless naim introduces a fraim compatible s1 version as I try to convince myself that I dislike the optical disruption of my fraimed box collection with the s1 tower more than I would enjoy it’s sonic improvements…

Sometimes you have to tell it straight and to the truth of it.
In your system the S1Pre will be a very large upgrade, more ‘difference’ than the 552 over the 282 as an upgrade - it is very large and I realized I’d not heard what my system was capable of before it had the S1Pre.

But the main thing is to be happy with your system as you have it. Hence don’t audition the S1Pre unless it can be afforded as you may really like it.

I’ve heard my Dealer use the S1Pre with a 500 Passive (and heard the S1Pre to 552 demo) and it is a very large upgrade there too - with an Active system it multiplies the effect more.

it’s hard to imagine that there is still room left for a further massive improvement…thats your words,dont be surprise…the sky is the limit, there will never be an endless for better, in few years there will be an upgrade to S1

Talking to Steve Sells at the Signals Naim event…he has an old Statement prototype at home that he “works on his spare time”. He is passionate about his craft, just a matter of time.

If I’d heard a small refinement when I home-demoed the S1 Pre against my trusted 552 I would not have spent the money.

The difference was very large and I don’t want to really describe it, but just as people have upgraded from 282 to 552 for what were, to them, very clear and good reasons, then this was easy as obvious if not more so.

If Naim had offered the half-way (like 252 is between 282 and 552) stepping-stone ‘Under-Statement’ at intermediate price point it would have been very tempting, but it was forget it or buy it.

I sneaked up to Ipswich today and borrowed something from Signals.

And I like…a lot!