I have naca5 cables and kimber 8tc jumpers. Naca5 to the top terminals, jumpers connect to the lower terminals.
I’ve owned the kimber jumpers for years, and don’t believe the few cm of inappropriate cabling affects the amp one iota. 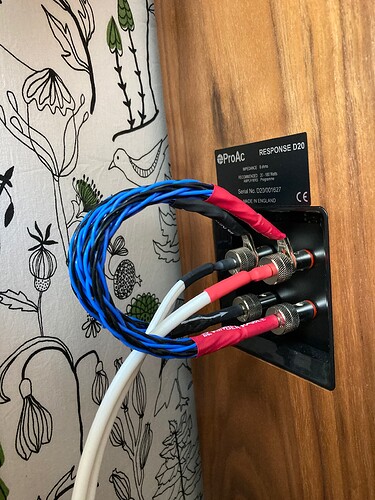 there is a pair of NACA5 jumpers on TM for $30 which might be a cheap way of having a play around, even if you have to terminate them its still cheaper than half a meter of bare cable, I was thinking about it for mine

Cheers, I have a watch on that, there’s a bid already.

Before Biwire speakers where invented the drive units where connected internally.

I use a pair of Royd RR1 speakers which where supplied as single wired speakers with the option to convert to biwire. The drive units are connected internally with hardwired (soldered) links and the upper speaker sockets are plugged. They can be converted to biwire by cutting the internal links and removing the plugs. 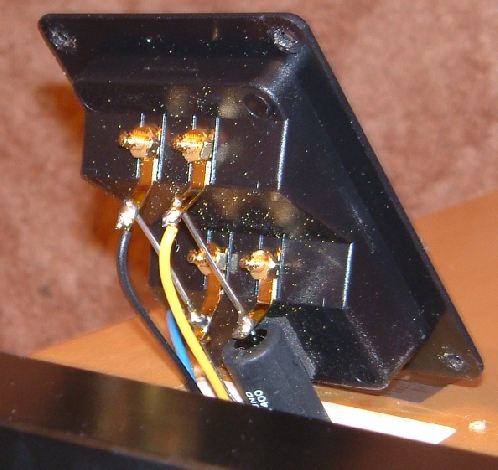 So, if the plate containing the speaker sockets can be removed, the simplest, cheapest and BEST option is to solder links internally.

Using f-connectors and external links increases the number of connections and that obviously isn’t a good thing.

My itch was scratched, sorry!

I always meant to put my Verteres back in to compare but haven’t bothered - the SL jumpers just stopped that need. Perhaps it’s just peace of mind as it were, but…

I got my ex dem / used SL jumpers from Tom Tom might be worth giving them a call.
On my Kudos Titan 808s I have the main SL lead to the top box and jumpers to the lower.

We got our Vertere jumpers from TomTom but they didn’t have SL jumpers available. New jumpers are way further down our list now than other possible improvements!

NACA5 jumpers on my main L&R: 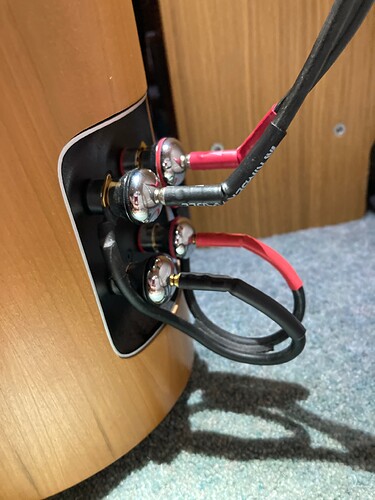 And a very similar arrangement with Linn K10 on my surrounds: 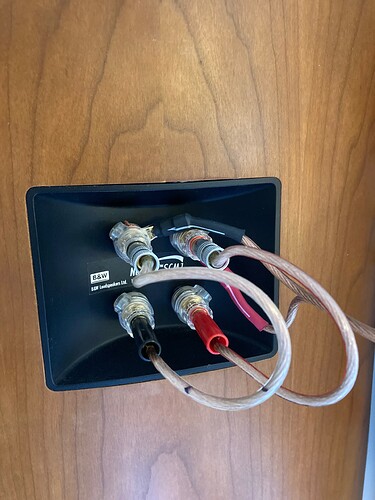 I got the NACA5 ones from a Naim dealer in Glasgow who used to offer them on eBay (and may still do). The K10s I made myself.

One other thing - from the manual to my speakers:

“The ear is at its most sensitive in the midrange, so we recommend that, when single wiring, you connect the cable from the amplifier to the terminals that directly feed the midrange driver.”

I’d always defaulted to connecting the amp to the physically lower set of terminals and jumping to the higher ones, but I like the reasoning behind this recommendation. 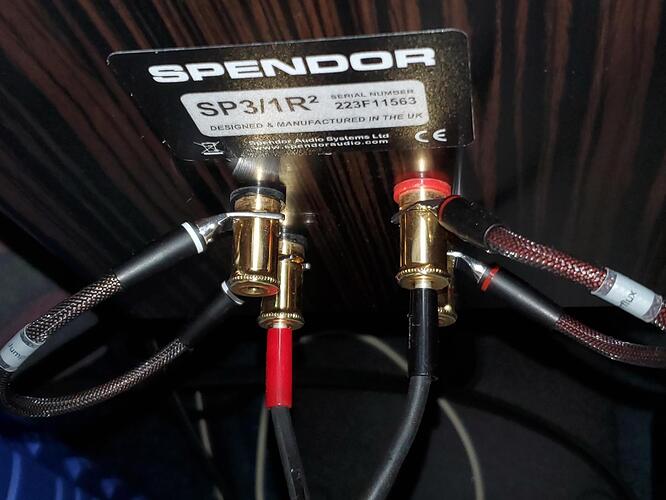 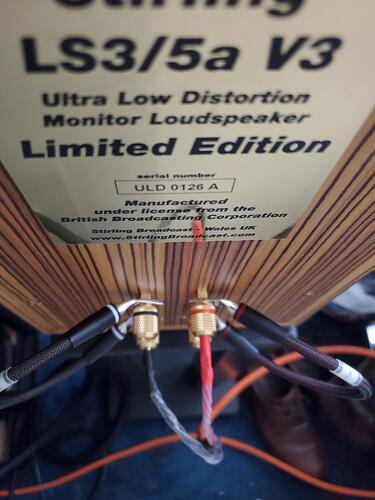 A number of years back I had a pair of Spendor SP 3/5 with factory bar jumpers and also assumed Spendor knew what they were doing and left the bars in place. I sold the speakers on but bought them back a couple years later and the new owner had some inexpensive jumpers made up from some home wiring. I immediately yanked the wire out and put factory bars back in place. Curiosity got the best of me and I put the house wire jumpers back in and was amazed how it opened up the little 3/5’s. I subsequently tinned some NACA 5 and used that with the speakers to good effect.

When I upgraded to 3/1 R2’s I was very disappointed in their sound upon arrival. They were very dark and shut-in and polite to the point of being offensive. I pulled the factory bars and again used the Naca 5 jumpers and they opened up to the point of being salvageable. I happened upon a set of used Furutech Jumperflux and was most happy with the results and well worth the upgrade. This is a major concession for some one who hates spending money on cable even though I have witnessed the positive effect numerous times. I had much the same result with a pair of Stirling Broadcast V3’s with Jumperflux from the factory metal bars supplied with the speaker. I wish speaker manufacturer’s would use a single pair of posts or alternately provide quality jumpers although this might be their way of telling you to bi-wire to get optimum performance from their speakers.

I see you had diagonal connections in the first photo. I’m trying these at the moment with vertical jumper wires on my main system, and blow me down with a feather, it makes a very nice improvement in opening up the sound more and firming the bass.

For the sharp eyed the first photo with Naca5 on Spendor’s does indeed have the leads reversed. I grabbed a couple images and that particular one the amplifier being used (Jadis) reverses phase. Another oddity that was clearly audible.

I believe Nordost and others have put out bulletins discussing the various options for bi-wiring and use of jumpers. I found the diagonal arrangement to provide me the best sound. The great thing is this is a potentially no-cost upgrade

Certainly easy enough to try the different options and determine which you prefer.

When I used speakers with jumper plates I was advised by a speaker design engineer at Linn to put the positive to the highest frequency unit and the negative to the bass.
I used this as advised all the time I had multi connector type speakers. 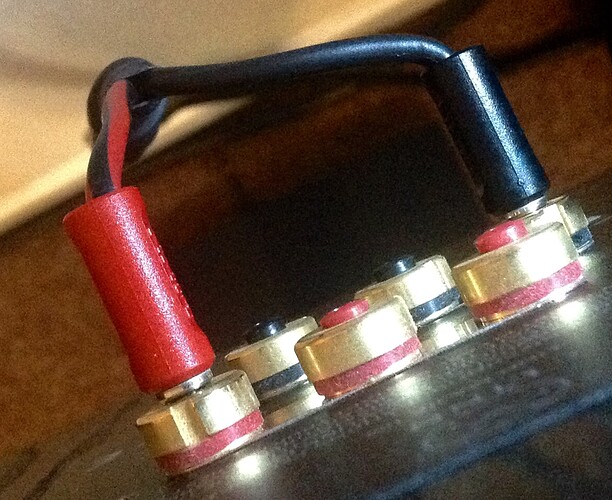 I use NAC A5 jumpers on my ProAcs which are fed with NAC A5 from my Nova.

I suspect that ProAc & other manufacturers supply their speakers with metal jumper plates (or similar) as: -

1 They feel they work as well as cable or, more likely,
2 They have no idea what speaker cable is going to be used in the owners system so can’t supply the appropriate jumpers & just supply a ‘one size fits all’ solution.

Great stuff I’ve always used this method and there is no cost to try and much pleasure to be had.
ATB.

I now have Kudos speakers with single terminals.

Edit
Here is a post from a now defunct site that explains it.

“Exactly the way a single wired passive speaker should be connected. I have been demonstrating this to staff recently during some tune-dem refresher
courses I have been running. Majik 109 with positive connected to tweeter and negative connected to bass compared with both connected to bass. It makes
a surprisingly large difference to detail and clarity.
The reason for this (if you are at all bothered) is that you always have the same impedance between the amplifier output and any drive unit in the system (the
length of speaker cable plus one full link plate). It is also important that the negative wire goes to the bass negative as it gives the clearest path for the back
e.m.f. from the bass driver to be sunk back through the amplifier, reducing its influence on the other drivers in the speaker.”

Switched my Response D2 from LF terminals via HF terminals to this … and found it both clearer and a more relaxing presentation.