Time for a change?

When there’s a chance of lightning I keep an eye on a lightning tracker app. 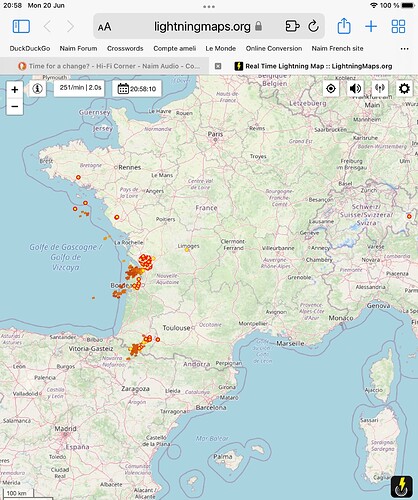 Probably more entertaining than useful but sometimes it can give you a clue where it’s going.

We had a 1 minute power cut last Friday, no thunder, no warning but long enough to pull the plug on the system before it came back up. The induction hob hasn’t worked since though.

@Polarbear I would be interested in your thoughts on this cable. I tried them and could not really tell a difference between them and SL. In the end I took out the SL as I could not tell a material difference between those and stock ones! I was planning to try again as I have the Titan Speakers now rather than NBL’s but not sure… I may just try the Witch Hat stuff instead. I had a great chat with them a few months back and feel what they are doing will suit me and my ears. The mark up on cables is pretty high as I am sure you know so when you factor no dealer margin and a smaller profit margin for Which Hat due to them being a smaller operation/less marketing etc it means they can offer a cable for significantly less than the likes of Naim but maintain a high quality. I am excited to see if this is the case of course! I can get 2x interconnects, 1x Din/XLR Pair, Speaker Cables and a Snaic for less than the Naim SL Din/XLR pair. Good returns policy too. They can also extend if needed. A few people here use them and seem to be happy. Nice to have options ehh?!!

Thanks for that Yeti. I might keep eye on it later today for SW London.

… and another (my) interpretation is that we have absolutely no idea, and shouldn’t care anyway. Buy the ones you like which are in your budget.

One question Yeti, with a quick response to not disturb this interesting thread. I live in a city, in a building. My system is in front of a solid wall, at a distance of 3 meters from the window on that side. The other window is on the opposite side, around 6 meters from the system.
Have I any risk for the hifi system if there are thunderstorms?
Sorry Polarbear, it’s only one question.

My understanding is that if your building is struck the wiring conducts electricity throughout the house. It’s why unplugging is essential rather than just switching off. I doubt it is likely that the lightning will come through a window. It tends to strike high objects that give it a route to earth.

Just my understanding of course.

I use a lightning surge protector here in France. LeGrand will do something similar such as

Unplugging is what I’ve always learned (and do) too.

Some say that the surge protector is not good for optimal sound quality.
Maybe I should open a new thread…

Some say that the surge protector is not good for optimal sound quality.

That’s what I’'ve always found. I just switch off and unplug when I’m worried.

Anyway, back to the music,

I am using the stock XLR’s here, not the SL’s. I tried the SL’s when Pete came round a couple of weeks ago and although initially impressed with the SL’s it soon became obvious that they were too aggressive and in your face and by the end of the day the standard cables were in the system.

To my ears the Chord music XLR’s portray a much bigger sound stage, they go deeper and higher and the soundstage increases significantly. Not only that but the space around vocals is improved and the music becomes more three dimensional.

Don’t forget I have gone back to the cheap and nasty power block I have been using since the Powerhaus M6 went to back. One would imagine that when this comes back the combination of Chord Powerblock and XLR’s is going to be pretty substantial.

We hear it the same Polarbear!