I have a deal set up to trade my Atom in for a N272…on the basis its a superior DAC / streamer in the 272 c.f the Atom. I do love the Atoms app and interface etc. I use a 250-2 on the end of the Atom currently so don’t use its on board amp.

Not so much of an issue if you plan local UPnP streaming, but there’s no native Qobuz support, among a longer list of missing features compared to the current platform.

Given the old platform and the end of life nature of the 272 I hope you’ve got a very good deal indeed for that!

The 272 will not read the metadata in your music files on a USB hard drive like the Atom. You will need a NAS for that.

I think you should proceed with caution here, the 272 might look like a bargain but it has its shortcomings.

Rather a left-field suggestion, but…,

In your set-up, where you’re using a power amp, possibly also consider swapping your Atom for an Atom Headphone Edition - you’ll get an instant pre-amp upgrade, while keeping all the features and functionality you love. Obviously a huge benefit if you like listening with headphones, too.

So I have been playing with my Atom HE for a week now. Purely as a preamp and it is fantastic. It sounds richer, wider, purer and more refined as my old Atom (also as a preamp). Same cables, same power amp, same speakers, same room. It is really hard to describe what has changed, but I would say the PRaT is still there, but more refined, with less distractions (like emphasised bass or mids) and pulling me more into the music. I even noticed this when listening to Internet Radio several times thi…

Naim have dropped heavy hints on many occasions that a new platform 272 replacement is in development. This would be perfect. If only Naim would give greater clarity on if and when it will appear it would be massively helpful. It would be a real shame to get an Atom HE only to than have a new 272 appear and able to provide a far greater improvement.

This must have been quoted 1000 times and one can’t drop a hint much harder than that. From Charlie Henderson:

And as for the rest of the Naim portfolio… despite the temptation, I’m not going to be drawn on exactly what is going on behind the scenes, but as I’ve said before, we’re listening, and we’re busy, perhaps more so than ever before. I’ve been asked for example about the 272 on many occasions, and while not confirming anything, at times like these I always remember the phrase ‘the best things in life take time, but are always worth the wait’

Though it seems quite sure that it won’t be Paris. From your UK show thread:

If you’ve been keeping up with all the many threads re component shortages/waiting times, I’m sure you’ll understand we’re concentrating on delivering the many orders we have for existing products right now…

That reply quoted above was about not launching new products at this year’s Paris show….

Sorry for misinterpreting. Edited above. Paris appeared for the first time after the quoted post, and WeekendWarrior was talking about Bristol. 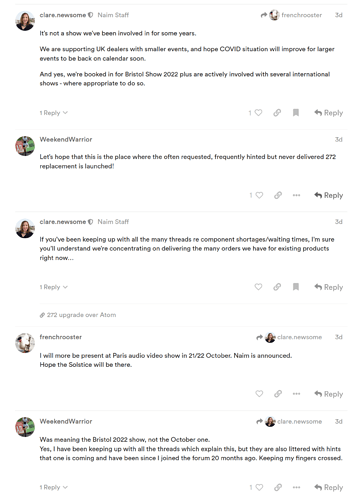 As a moderator, I sometimes get a slightly different thread order/timing - this is one of those occasions, it appears.

I suspect we won’t see it until at least most of the 272 stock that seems to be around has been sold.

also consider swapping your Atom for an Atom Headphone Edition - you’ll get an instant pre-amp upgrade, while keeping all the features and functionality you love.

I’ve been on the cusp of downsizing my 500 system again. The last time I went too far (to a Nova). Now I have an Atom HE and keep wondering if pairing it with a NAP 250 makes any sense.
The weak part of this arrangement is the streamer/DAC section of the HE vs. something like an NDX-2.
I’ve heard that Naim have tried the Atom HE with a 250. What has been their opinion of it?

Why would it be a shame? Doubt owning an Atom HE prevents a person from acquiring a 372 when available.

The 272 is an excellent pre amp if you can live with the old streaming platform. If you need any reassurance just google all the great reviews from many hi fi mags.

I understand it more like “ let not disappoint our customers hopes”. Let them believe.